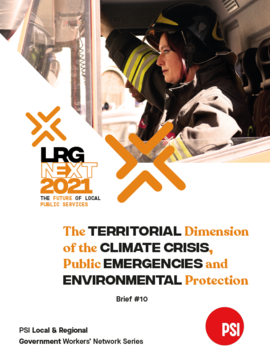 The Territorial Dimension of the Climate Crisis, Public Emergencies and Environmental Protection

This brief is a follow-up to the series produced for the Local & Regional Government Network series, LRGNEXT2021.

Cities produce around 70% of global greenhouse emissions and consume about two thirds of the world’s energy. Urban areas also concentrate more than half of the world’s population, and that figure is expected to increase to 68% by 2050.1 Cities and urbanisation inevitably have a strong impact on the climate, ecosystems and biodiversity. As they concentrate and intensify human-induced warming locally, they contribute to more frequent hot extremes and heatwaves.2 Natural disasters, epidemics and pandemics, war and conflict additionally impose serious challenges to local communities and to public service workers, especially first responders and frontline workers, many of whom depend on local and regional governments (LRGs). These emergencies are made worse by the negative impacts of “man-made disasters” such as austerity/budget cuts, privatization, outsourcing, short staffing, and lack of regular trained staff.