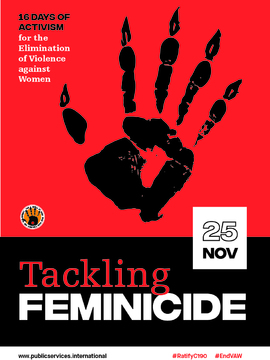 Take Action for the Elimination of Violence against Women

PSI will be active on Twitter starting on 25 November where we will be tweeting Governments with messages from our World Women's Committee Chairs, focusing on the Ratification of C190.

PSI is also joining the Global Union Federations in the 16 Days of Activism, speaking in unity to put an end to violence against women. Each day a global union will share a their message on social media.

PSI will be leading on 8 December, with a focus on feminicide as agreed in its recent World Women's Committee. Feminicide encompasses more than femicide, the murder of a females by males because they are female, because it holds responsible not only the male perpetrators but also the state and judicial structures that normalize misogyny.

Download and use the poster or social media card.