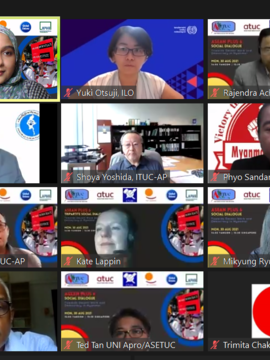 Resolution for democracy and decent work in Myanmar [English]

The ASEAN Plus Social Dialogue amongst Trade Unions, Parliamentarians and National Unity Government of Myanmar

Resolution for democracy and decent work in Myanmar

This social dialogue of unions and parliamentarians from the countries covered by the Association of Southeast Asian Nations (ASEAN) and Japan, South Korea, India, Australia and New Zealand,

REAFFIRMING our commitment to ILO Resolution ILC.109 Resolution II, “Resolution for a return to democracy and respect for fundamental rights in Myanmar”,

UNEQUIVOCALLY DENOUNCING the military coup that took place in Myanmar on the 1st of February 2021, and the sustained illegal actions of the military run State Administration Council (SAC) contravening demands made by the international community, including the International Labour Conference,

NOTING that the conditions described in the ILC resolution remain, that brutal attacks against workers and communities in Myanmar continue, that more than 1000 people have been killed by the military junta, more than 7000 people have been arrested and at least 5800 remain wrongfully imprisoned, while many more arrest warrants have been issued and 26 people have been sentenced to death for their part in the protests,

RECOGNISING that, in recent months, the rapidly spreading Covid-19 pandemic has been fueled by at least 260 attacks on health-workers and health systems by a military determined to punish health workers for their role in resisting military rule,

RECOGNISING that many local and international companies have ceased operations in Myanmar to ensure that they do not support the military coup, and yet ALARMED that several multinational corporations continue to ignore international human rights obligations and have maintained support for the military,

REMAINING DEEPLY CONCERNED by the sustained discrimination, abuse and of ethnic minorities in Myanmar at the hands of the military and the militarization of their states and particularly alarmed by the ongoing attacks, displacement and abuse of all communities including the Rohingya,

APPLAUDING the courageous actions of workers and who have risked their lives taking strike action in the defence of democracy and an end to military oppression in Myanmar,

ALSO RECOGNISING that member states of the United Nations are bound to uphold the UN Charter and, that “whenever more than one authority claims to be the government entitled to represent a member state” the applications must be considered “in light of the Purposes and Principles of the Charter” (A/RES/396(V)). Recognising that these purposes and principles include “the suppression of acts of aggression”, “conformity with the principles of justice and international law”, “respect for the principle of equal rights and self-determination of peoples”, “promoting and encouraging respect for human rights and for fundamental freedoms for all without distinction as to race, sex, language, or religion”

b. Reject the claim of the military junta to represent the peoples of Myanmar in any UN official functions;

c. Establish diplomatic relationships with the NUG as the legitimate representative of the peoples of Myanmar;

e. Refer the crimes committed by military leaders against workers and the peoples of Myanmar during this attempted coup to the International Criminal Court;

f. Increase development assistance and disaster relief to the peoples of Myanmar through the NUG or other methods supported by the NUG and ensure no funds or benefits are directed to the military;

g. Countries refrain from proceeding with the ratification or implementation of the Regional Comprehensive Economic Partnership (RCEP), or any trade agreements with Myanmar and, when a civilian government is restored, to conduct an impact assessment to determine the trade needs of Myanmar in light of the multiple crisis the country has endured;

h. ASEAN countries, ensure that the ASEAN Special Envoy meets with the NUG, trade unions and civil society organisations and ensures the unconditional release of political prisoners including trade unionist, a cessation of military violence and restoration of civilian government.

a. Continue efforts to support the rights of the people of Myanmar to self-determination and to achieve democracy;

b. Facilitated the move toward a new democratic federal constitution that respects all fundamental human rights and freedoms and ensures an entirely civilian, representative, democratic government;

c. Recognise the efforts of workers and their trade unions in the defence of democracy and commit to a new labour legislative and policy framework that enables unions to prosper without hindrance and all workers to enjoy decent work and fundamental human rights.

a. Cease any direct or indirect business operations in Myanmar that directly or indirectly provide finance, including through the extraction of taxes, or material support, to the military;

b. Maintain, where possible, wages and livelihoods of workers in Myanmar,

c. Hold any taxes or payments that would be paid to the government of Myanmar or holding companies in trust to be provided to the democratic government when fully restored;

d. Respect Conventions No. 87 and 98 and ensure that workers and employers can exercise their freedom of association rights in a climate of freedom and security, free from violence, arbitrary arrest, and detention.

a. Provide development assistance and disaster relief to the peoples of Myanmar through the NUG or other methods supported by the NUG and ensure no funds or benefits are directed to the military.

a. Support a global day of action in support of democracy in Myanmar on the 15th September 2021 and support an ongoing campaign until a democratic government is able to function;

b. Provide solidarity and support to unions and workers in Myanmar through financial support, engaging their governments and other expressions of solidarity;

c. Be prepared to support unions in Myanmar to grow and shape a new, democratic, and more just Myanmar following the full restoration of civilian government.