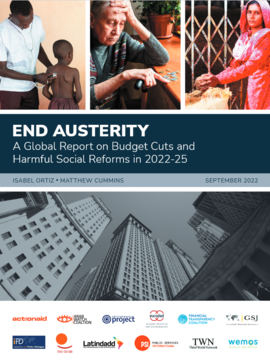 End Austerity: A Global Report on Budget Cuts and Harmful Social Reforms in 2022-25

This report alerts of the dangers of a post-pandemic austerity shock, far more premature and severe than the one that followed the global financial crisis. Instead of harmful austerity measures (or “fiscal consolidation”), governments must urgently identify alternative financing options to support their populations that are coping with multiple and compounding crises - from health, energy, finance and climate shocks to unaffordable living costs. The report: (i) presents the incidence of budget cuts based on IMF projections in 189 countries until 2025; (ii) reviews the latest 267 IMF country reports to identify the main austerity measures being considered by Ministries of Finance and the IMF in each country; and (iii) presents alternative financing options, ultimately calling on countries to end austerity by creating fiscal space to finance a people’s recovery and progress toward human rights and the Sustainable Development Goals (SDGs).

Analysis of IMF expenditure projections shows that the adjustment shock is expected to impact 143 countries in 2023 in terms of GDP or 85% of the world population, more than 6.3 billion people. Most governments started scaling back public spending in 2021, and the number of countries slashing budgets is expected to rise through 2025. A long list of austerity measures is being considered or already implemented by governments worldwide: targeting and rationalizing social protection (in 120 countries); cutting or capping the public sector wage bill (in 91 countries); eliminating subsidies (in 80 countries); privatizing public services/reform of State-Owned Enterprises (SOEs) (in 79 countries); pension reforms (in 74 countries); labor flexibilization reforms (in 60 countries); reducing social security contributions (or “tax wedge,” in 47 countries); and cutting health expenditures (in 16 countries). In parallel, three prevalent measures to raise revenues in the short-term that also have detrimental social impacts include: increasing consumption taxes, such as sales and value-added taxes (VAT) (in 86 countries); strengthening public-private partnerships (PPPs) (in 55 countries); and increasing fees/tariffs for public services (in 28 countries). These austerity policies have negative social impacts on their populations, especially harming women, and must be avoided by policy-makers.

Austerity cuts are not inevitable, there are alternatives. There is no need for populations to endure adjustment cuts: instead of cutting public expenditures, governments can increase revenues to finance a people’s recovery. There are at least nine financing alternatives, available even in the poorest countries. These nine fiscal space financing options are supported by policy statements of the UN and the IFIs, and have been implemented by governments around the world for years. These include: (1) increasing progressive tax revenues, (2) restructuring/eliminating debt, (3) eradicating illicit financial flows, (4) increasing social security contributions and coverage, including adequate employers contributions and formalizing workers in the informal economy with decent contracts, (5) using fiscal and foreign exchange reserves, (6) re-allocating public expenditures, (7) adopting a more accommodating macroeconomic framework, (8) lobbying for ODA and transfers, and (9) new Special Drawing Rights (SDRs) allocations. There is a global campaign to stop austerity measures that have negative social impacts: End Austerity.

Click here to watch the launch of this report and the launch of the End Austerity Campaign, with Sharan Burrow, Jayati Ghosh, Cephas Lumina, Roberto Bissio, J.P. Bohoslavsky and others.