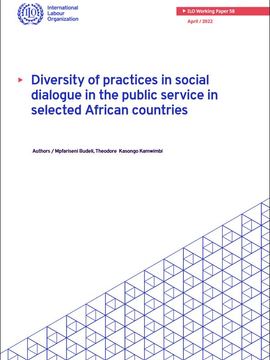 This ILO working paper 58 on the diversity of practices in social dialogue in the public service in selected African countries, namely Angola, Kenya, Tunisia, South Africa, and Ghana focuses on how the diverse practices in social dialogue, as one of the four pillars of the Decent Work approach, is reflected in the public service.

Social dialogue, which forms part of the regulation of labour relations in the public sector, can take a variety of forms ranging from the simple act of publishing informal recommendations, or consultation and sharing information to the most formal and binding negotiated agreements, bargaining or more developed forms of consultation. Although each country has its own cultural, historical, economic, and political setting, there is a diversity of practices in social dialogue in the public service, and the common model of social dialogue for all countries seems to be freedom of association and the right to collective bargaining. It is, therefore, worth showing how different countries manage to adapt their diverse practices in social dialogue in the public service to the national situation.

To this end, this report focuses on five selected African countries, namely Angola, Kenya, Tunisia, South Africa, and Ghana. These countries represent respectively the five main subregions of Africa (Central, Eastern, Northern, Southern and Western Africa) as suggested by the ILO. A thorough analysis of these countries’ social dialogue mechanisms in the public service shows that the functioning and sustainability of such mechanisms may be facilitated by permanent structures or institutions, such as national tripartite consultative committees.

In four of the selected countries, (Ghana, Kenya, South Africa and Tunisia), civil servants or workers employed in the public administration of the State, or any other government agency are covered by the general labour laws, while in Angola, civil servants are explicitly excluded from the scope of labour law. At the same time, many other countries have public administration employees with non-civil servant status who are governed by ordinary or special labour regulations.

In South Africa, Kenya, Ghana, and Tunisia, the law recognises the right of state employees to become trade union members to form and join trade unions. In these countries, the relations between public administration and civil servants have always been built within an organised and highly regulated hierarchical structure governing individual and collective relations. However, in Angola, State employees do not usually enjoy their freedom of association as Government’s approval is required to form and join unions. Overall, in the selected countries, civil servants maintain collective relations with the authorities through representative bodies or contacts between civil servants' associations and/or trade unions and civil servants.