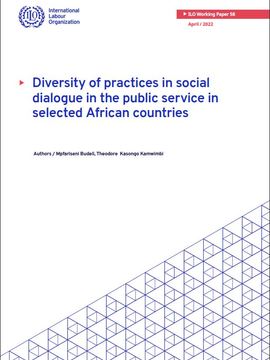 This ILO working paper on the 'Diversity of practices in social dialogue in the public service in selected African countries' was published in April 2022.

In four of the selected countries, (Ghana, Kenya, South Africa and Tunisia), civil servants or workers employed in the public administration of the State, or any other government agency are covered by the general labour laws, while in Angola, civil servants are explicitly excluded from the scope of labour law. At the same time, many other countries have public administration employees with non-civil servant status who are governed by ordinary or special labour regulations.

In South Africa, Kenya, Ghana, and Tunisia, the law recognises the right of state employees to become trade union members to form and join trade unions. In these countries, the relations between public administration and civil servants have always been built within an organised and highly regulated hierarchical structure governing individual and collective relations.

However, in Angola, State employees do not usually enjoy their freedom of association as Government’s approval is required to form and join unions.

Overall, in the selected countries, civil servants maintain collective relations with the authorities through representative bodies or contacts between civil servants' associations and/or trade unions and civil servants.