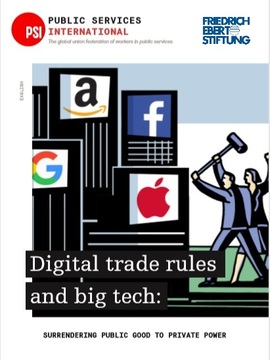 As tech giants emerge as the undisputed winners of the Covid-19 crisis, they continue to use free trade agreements to protect themselves from regulation. A new report from PSI raise the alarm about the damaging implications this would have for the democratic and just societies we aspire to

While the Covid-19 pandemic has led to an unprecedented health crisis and is predicted to have devastating economic impacts, tech giants such as Google, Amazon, Facebook and Apple are thriving.

Their power extends to the core of central and local government and public services. They monitor our workplaces, streets and even devices in our homes, and run our transport, telecommunications and energy infrastructure, sometimes from outside the country.

They create the algorithms that decide who gets a job or gets fired, is given a loan or enters university, and the artificial intelligence that does the work of doctors, technicians and prison officers.

Private contractors run the IT operations and databases of government agencies, storing our data on their own servers or in the ‘cloud’, which usually means they are controlled in the United States. This list expands every week, as governments become more dependent on digital technologies and on the firms that control the information and systems that run them.

There is enough evidence that tech giants abused of the power they had before the Covid-19 crisis through tax evasion, breaches of human rights, and exploiting so-called ‘self-employed’ workers. Those companies have engaged in frauds on consumers, mass breaches of data privacy, as well as manipulation of democratic elections. Tech giants are bad employers and bad citizens and unchecked powers are a risk to democratic and just societies we aspire to.

There is currently very little regulation to control these activities or hold the tech giants to account. Their global reach allows them to organise their corporate identities, locations and operations to bypass the limited laws and restrictions, and tax obligations, that do exist.

Big Tech wants to keep it that way. That is the purpose of the new rules on ‘electronic commerce’ or ‘digital trade’ that their governments are securing for them through secretive international free trade agreements and with a view to extending them to the WTO.

This report raises the alarm for public services unions and will help us to mobilise against rules that put profits before people.