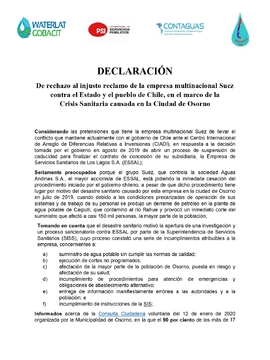 The signatory organizations the unjust demand of the multinational company Suez against the Chilean State in response to the government’s decision taken in August 2019 to open a process to end the concession contract with Suez’s subsidiary, ESSAL, due to the sanitary disaster caused by this company in the city of Osorno in July 2019, when the precarization of its operational arrangements and staff working conditions caused an oil spill in the Caipulli potable water plant, which polluted the Rahue river and provoked an immediate interruption of the water supply that affected around 150 thousand people, the majority of the population.