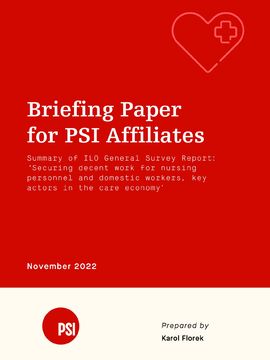 This is the first time that these instruments have been subjected to the process of a General Survey. However, the objectives are broader than a technical review of the instruments. The report examines the various categories of care workers covered by the four instruments, both in the formal and informal economies as well as care workers in various settings (hospitals, clinics, private households). The gender dimension of nursing, domestic work and care work was also examined in the report as well as the nature and impact of changes in the structure and organization of work in the care economy.

The contributions of PSI and affiliate unions are acknowledged by the ILO as key to shaping the report. The ILO received responses from 115 Member States, 135 worker organisations and 14 employer organisations. PSI made a general submission focused on Nursing Personnel in general, and two additional submissions focused on Community Health Workers (CHWs) and the Social Care Workforce. Additionally, PSI worked with affiliates to produce 22 submissions at both the national and regional levels.

This briefing paper, published by PSI Asia Pacific, contains the key points of the ILO General Survey Report, highlighting the expert committee’s recommendations on how to secure decent work for key actors in the health and care economy. It is intended for PSI affiliates with the hope that it will make the information in the original report more accessible to the health care workers themselves and inform our continuous campaigns and efforts.