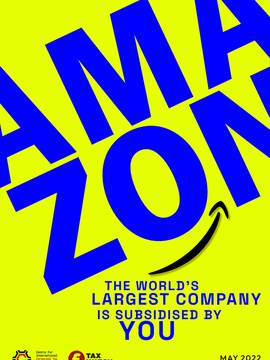 Amazon: The World’s Largest Company is subsidised by You

A new report by the Centre for International Corporate Tax Accountability and Research (CICTAR) and TaxWatch reveals the growth and scale of Amazon’s government contracts and calls for action by governments to restrain Amazon’s aggressive global tax dodging.

Amazon is widely known globally for its online retail sales and delivery, but Amazon’s profits are driven by cloud computing and rely heavily on contracts with governments. A new report by the Centre for International Corporate Tax Accountability and Research (CICTAR) and TaxWatch reveals the growth and scale of Amazon’s government contracts and calls for action by governments to restrain Amazon’s aggressive global tax dodging.

Jason Ward, Principal Analyst for CICTAR said: “Amazon’s aggressive tax avoidance has uniquely been called out by the current and former US presidents and by many global leaders and has been a major impetus for global tax reforms. However, governments all around the world continue to reward Amazon with massive and growing contracts. From local governments to the CIA, from tax authorities to public universities, government bodies should not be rewarding tax dodging multinationals and at a minimum, must require transparency on tax payments as a condition of any future contracts.”

Amazon Web Services (AWS) controls more than a third of the world’s cloud computing market and is by far the most profitable segment of Amazon’s business. While AWS accounts for only 13% of Amazon’s total revenues, it makes up 74% of the company’s operating profit. Over the last 5 years, the AWS business has grown exponentially, especially in the public sector. This new report focuses on the US, UK and Australia as case studies of Amazon’s global tax dodging and government contracts.

AWS is rapidly growing its contracts with governments at all levels and public institutions worldwide. In the US, AWS was recently awarded a US$10 billion contract by the National Security Agency (NSA), building on a previous US$600 million contract with the Central Intelligence Agency (CIA), and is in legal battles with Microsoft over a large Pentagon contract. In the UK, AWS won almost £600 million in government contracts between 2018-2021. In 2020, AWS signed a master agreement allowing it to treat all UK central government agencies as one client, which will further increase the volume of its UK government contracts. In Australia, Amazon will receive over AU$560 million from the government’s Digital Transformation Agency between 2019 and 2025.

Despite collecting public money through large and rapidly growing government IT contracts, Amazon continues to scorn paying its fair share of taxes. Amazon’s uses government contracts and subsidies to expand its empire and stifle competition, but it avoids tax obligations on the profits it makes. The less tax paid by Amazon, means the responsibility to fund essential public services is shifted to its hundreds of millions of customers and growing global workforce.

As Amazon’s profits and public contracts have grown in recent years, it faces continued scrutiny by global tax authorities. Ironically, tax authorities in both the UK and Australia purchase AWS services. In its most recent annual report, Amazon reported US$3.2 billion in ‘tax contingencies’, meaning it may have to pay this amount as tax authorities challenge its accounting and financial practices.

At its shareholder meeting on 25 May, Amazon investors will vote on a historic proposal asking the company to report publicly on its tax payments and revenues in every country where it operates. Even shareholders increasingly understand that Amazon’s aggressive tax avoidance is putting its business model at risk, is stealing from public budgets for essential services and is unfair to other businesses that act responsibly and pay a fair share.