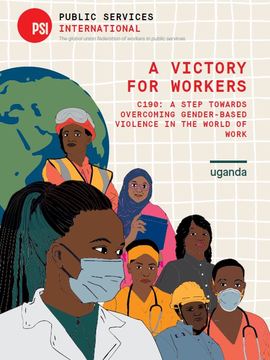 A victory for workers - Uganda

ILO Convention C190: A step towards overcoming Gender-Based Violence in the world of work

In 2019, at its centenary conference, the International Labour Organisation (ILO) adopted a new Convention 190 and Recommendation 260 titled ‘Ending Violence and Harassment in the World of Work’. C190 was celebrated by Public Services International (PSI), women trade unionists and women’s rights organisations all over the world as a major victory for women worldwide, and an important step forward in the fight to end Gender-Based Violence (GBV) and all forms of violence.

GBV is a systemic problem rooted in unequal balance of power between women and in men, and in social discontent. While it affects both men and women, it disproportionally affects women and children. Overcoming GBV it requires an active commitment from all of society to make systemic changes or disruptions to everyday life. C190 is one such tool that allows us to create such a disruption and bring about systemic change.

This booklet is intended to be a tool for trade unionists and members of civil society organisations and social movements. The booklet aims to empower ordinary workers and progressive organisations on C190 and campaign for Uganda to ratify the convention. All workers have a right to world of work that is safe and free from all forms of violence and harassment.