Conventionally, the immediate gains from wealth in a country –particularly mineral-rich countries like Tanzania– should be able to trickle down to all its citizens. Unfortunately, when some of the biggest players in the mining industry are looking to get richer by playing the tax system, the citizens who do the real hard work end up being the hardest hit by tax inequalities. These inequalities are within the face of poor infrastructure with health services and education.

The government of Tanzania has recently been in a tussle with the Acacia Mining Company because the latter is alleged to have engaged in tax evasion, money laundering, and other acts of corruption. Acacia Mining, formerly known as African Barrick Gold and 63.9% owned by Canada’s Barrick Gold, are the biggest copper and gold exporter operating in Tanzania. The company has also got operations in Kenya, Mali and Burkina Faso, but none of their plants in these other countries are operational. The Tanzanian government recently charged the company with damages of about $190,000, with two major scandals publicly reported; once in 2016 and again in 2017. Multinational companies have taken advantage of the loopholes in the tax incentives provided by the government.

Trade Unions and Civil Society Organizations (CSOs) in Tanzania met earlier this year to review a research report developed through a collaboration between Public Services International (PSI) and the Friedrich-Ebert-Stiftung (FES) foundation in Tanzania. The report noted that tax incentives provided to multinational companies are susceptible to abuse, which consequently leads to revenue loses to government. From corporate income tax, value added tax, and import duties to stability clauses, multinational companies often search for avenues to avoid paying fair taxes.

Mining is one of the leading sectors in Tanzania, with the value of mineral exports increasing each year.

Average contribution of the mining sector to Tanzania's GDP

Unions and CSOs applauded the reforms that the government of Tanzania has initiated in the mining sector regarding tax incentives. These reforms should be enforced and further changes made where necessary, if the country wishes to ensure that the proceeds from the mining sector benefit its citizens. Some of these reforms include:

Unions and CSOs further recommended that Government should increase transparency through public participation; review all existing statutory tax incentives through a cost-benefit analysis, and removing those that are not beneficial.

A detailed list of 11 recommendations by unions and CSOs on the mining sector in Tanzania can be found in the policy brief developed by Tanzanian trade unions and CSOs in partnership with PSI and FES below. As a follow-up to their meeting, Tanzanian unions and CSOs submitted this policy brief and other key documents carrying information from the research report to Tanzanian government institutions, as well as local media. 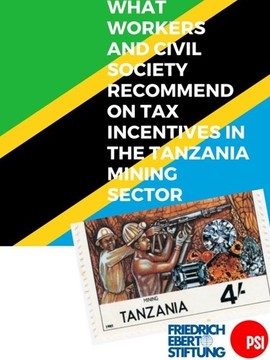