Darkness at Sunrise: UK Care Homes Shifting Profits Offshore? published by PSI, and authored by the Centre for International Corporate Tax Accountability and Research (CICTAR) shows how Revera’s CEO and top management are the directors of over a dozen subsidiaries in renowned tax havens such as Jersey, Guernsey and Luxembourg. Revera is entirely owned by the Canadian Public Sector Pension Investment Board (PSP) and unions are calling for the company to be made public to ensure workers' pensions aren't used to support tax dodging or profiteering from pain.

Placing the profit motive at the heart of the social care system has undoubtedly contributed to increased Covid-19 infection rates and deaths in many countries across the world. But many corporations in the care sector are able to avoid public scrutiny by using offshore subsidiaries to hide their financial affairs. Not only does this deprive governments of the revenue needed to fund quality public care services - it also undermines collective bargaining, as a large share of corporate profits which could be used for wage increases for low paid care workers are hidden from sight.

“Unscrupulous employers have been allowed to exploit workers and put residents at risk, while taking the profits and shifting them offshore.”

PSI, EPSU and unions across Europe ar currently leading the push for the EU to support Public Country by Country Reporting (PCBCR) which would require corporations to publicly reveal where they pay their taxes, and enable stakeholders - including workers, taxpayers, and the community - to hold them accountable.

PSI's 2020 State of Tax Justice report exposed for the first time the brutal cost of tax dodging for our public healthcare systems, revealing that the world loses 34 million nurses' salaries to offshore tax havens every year – one per second. Unions in the care sector are increasingly understanding tax as a core labour issue after a series of high profile wins, such as in Australia where research by CICTAR lead to significant media coverage and resulted in a major Senate Inquiry into the sector. (Find out more about getting involved with CICTAR here).

“To fund the recovery and rebuild our care sectors, we need to finally put an end to corporate tax dodging by forcing these companies to publicly reveal where they do or don't pay their taxes. No company sending profits to tax havens should receive public funds – especially not in the care sector.”

The most effective way to make corporations accountable is by making their accounts public. The recent OpenLux investigation into Luxembourg's role as a major tax haven at the very heart of Europe demonstrates the need for increased transparency. On the 25th February, EU member states are set to vote on PCBCR proposals; in order to win meaningful progress, engagement from EU unions is urgently needed. (Find out how you can support the campaign here) 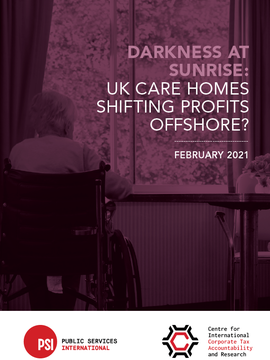