The figure is a finding from a new WHO report which also tell us that the global nursing workforce is currently 27,9 million. The publication, the first ever of that type, was released on 7 April on the occasion of World Health Day

The State of the World’s Nursing 2020 report highlights the crucial need for concerted and sustained efforts to maximise the contributions of the nursing workforce and their roles within the interprofessional health teams if the Sustainable Development Goals (SDGs) are to be achieved.

The publication of the report was one of the activities already lined up to mark 2020 as the International Year of the Nurse and Midwife as resolved upon by the World Health Assembly last year.

Numbers of nurses around the world

with data provided by 191 countries

is the global nursing workforce

of the entire global health workforce are nurses

With data provided by 191 countries, the report establishes that the global nursing workforce is 27.9 million, of which 19.3 million are professional nurses. Thus, the nursing workforce accounts for approximately 59% of the entire global health workforce.

But this number is still far below what is required to achieve universal health care. There is still a shortfall of 5.9 million nurses globally.

Behind these figures is the fact that the situation is far worse in developing countries and particularly in Africa. “Over 80% of the world’s nurses are found in countries that account for half of the world’s population”. Thus, 5.3 million (89%) of the shortage of nurses is concentrated in low and lower middle-income countries.

Meanwhile, countries which already face severe shortages of nurses are also confronted with outward migration of nurses to high-income countries, often due to poor remuneration and working conditions.

The UN ComHEEG noted that there would be a shortfall of 18 million health workers by 2030 if decisive actions were not immediately taken to invest in the health workforce.

The need for investment in nursing and the health workforce in general cannot be overemphasized. Governments must take drastic measures to improve the education, remuneration and working conditions of nurses to ensure their availability and retention.

Understaffing of hospitals has led to avoidable levels of stress and burnout with severe consequences on the physical and mental health and wellbeing of nurses and other health professionals.

This is the time for governments to fully walk their talk and implement recommendations of the United Nations High-Level Commission on Health Employment and Economic Growth (UN ComHEEG). The Commission noted that there would be a shortfall of 18 million health workers by 2030 if decisive actions were not immediately taken to invest in the health workforce.

The world would have been better prepared to face the ongoing pandemic if such required actions had been taken. We must now demand that governments don’t just commend or celebrate nurses and other health workers on the front line of the global response. They need to recruit enough nurses and other health workers and ensure decent working conditions for them, including provision of personal protective equipment (PPE).

The safety and security of nurses is equally of great importance. It is concerning that of the 55 countries that responded to the indicators on violence in the workplace in the survey conducted by WHO, only 37% reportedly have measures in place to address workplace violence against nurses. This is an added reason to demand of our countries’ governments that they ratify the ILO Violence and Harassment Convention, 2019 (C190) without delay. Safe nurses save lives.

The State of the World’s Nursing 2020 Report must serve as a point of departure for concrete action by governments.

PSI urges its affiliates to advocate for their countries’ governments to translate the evidence of this report into concrete policy and investment decisions, with the sense of urgency this requires.

The State of the world’s nursing 2020 report provides the latest, most up-to-date evidence on and policy options for the global nursing workforce. It also presents a compelling case for considerable – yet feasible – investment in nursing education, jobs, and leadership 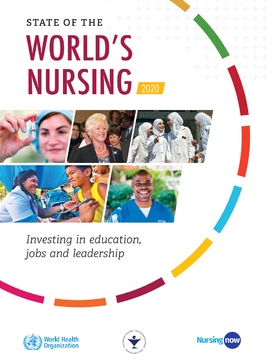