The Spotlight Report 2019, one of the most comprehensive assessments of the implementation of the 2030 Agenda, shows governments are failing to deliver the real, transformational policies required to achieve the Sustainable Development Goals.

The 190-page report is supported by a broad range of civil society organisations and trade unions, and informed by the experiences and reports of national and regional groups and coalitions from many parts of the world.

The contributions cover most aspects of the 2030 Agenda and the SDGs (and beyond), and reflect the rich geographic and cultural diversity of their authors.

The Report shows that structural transformation is more needed than ever before. It has to start at the local and national level and requires strengthening bottom-up governance and governance coherence.

The annual Spotlight Report, assesses the implementation of the 2030 Agenda and the structural obstacles to its realization, with a particular focus on the rich and powerful. In assessing progress, the report not only focuses on policy incoherence, but analyses and assesses the extent to which policies are framed by the ambitious principles of the 2030 Agenda, particularly the human rights framework, and the principles of equity and common but differentiated responsibilities. 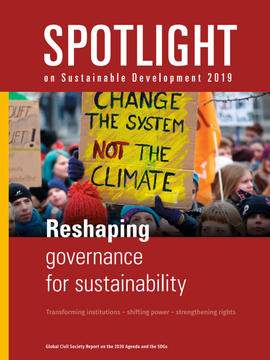 When UN member-states adopted the 2030 Agenda, they declared "business as usual is no longer an option." Yet four years on, they have to admit that they are off- track to achieve the SDGs.

Systemic discrimination keeps women out of positions of power, disproportionately burdens them with domestic and care-giving labour and remunerates their formal employment less than it does that of men.

Fiscal and regulatory policies (or the lack of) have not prevented the accelerated accumulation and concentration of wealth but have only made them possible, and thus exacerbated social and economic inequalities.

Destructive production and consumption patterns are increasing the number of extreme weather events, creating plastic waste dumps even in the most isolated places of the planet, and dramatically increasing the loss of biodiversity.

On top of the failure to make significant progress, national chauvinism and authoritarianism are on the rise in a growing number of countries, seriously undermining the social fabric, and the spirit and goals of the 2030 Agenda.

… but there are signs of change

Despite the gloomy outlook, there are signs of push-back. Policies reflect interests and power relations within and between societies – and these are not carved in stone but are in constant flux and can be changed.

In response to the failure or inaction of governments, social movements have emerged worldwide, many with young people and women in the lead. Climate and economic justice issues have been championed by social movements in all regions, with indigenous communities in the front line of many of these.

The world is over-armed while peace is under-funded

spent on Overseas Development Assistance: less than one tenth of global military spending.

stashed away by the mega-rich in offshore tax havens.

Movements against racial, gun and gender-based violence are growing in many countries, including the USA and India, while alliances of people with disabilities are becoming more visible, particularly at the global level. In a number of countries, most recently in Argentina, Sudan and Algeria, millions of people have taken to the streets to protest against authoritarian regimes and to demand democratic change.

The emerging global movements do not just chal- lenge bad or inefficient government policies. What they have in common is their fundamental critic of underlying social structures, power relations and governance arrangements. It is worth mentioning that governments themselves recognized in the 2030 Agenda the “enormous disparities of opportu- nity, wealth and power” in the world as “immense challenges” to sustainable development.

Thus, the implementation of the 2030 Agenda is not just a matter of better policies. The current problems of growing inequalities and unsustainable produc- tion and consumption patterns are deeply connected with power hierarchies, institutions, culture and politics. Hence, policy reform is necessary but not sufficient. Meaningfully tackling the obstacles and contradictions in the implementation of the 2030 Agenda and the SDGs requires more holistic and more sweeping shifts in how and where power is vested, including through institutional, legal, social, economic and political commitments to realizing human rights.

In other words, a simple software update (of policies, norms and standards) is not enough – we have to revisit and reshape the hardware of sustainable development (i.e. governance and institutions at all levels).