An unprecedented meeting organized by PSI Interamerica in November brought together leaders from several countries to discuss the challenges of incorporating workers with disabilities into both the world of work and trade unions.

With the support of the German trade union central DGB, PSI Interamerica held its first Regional Meeting of workers with disabilities on November 17th. Trade union leaders from several countries in the region participated and discussed a number of issues related to this population, which represents around 15% of all workers. PSI believes that the integration of workers with disabilities into the world of work is beneficial for everyone, both in terms of diversity and the quality of public services provided.

"This first meeting was the initial step in a longer process and opened some paths to follow: creating spaces with accessibility, respect, education, opportunity, diversity and equity," says Elida Cruz, coordinator of the DGB Project at PSI Interamerica. "The next cycle of this project, which will run from 2021 to 2023, will bring advances and challenges, including the promotion of the right to work and the adoption of affirmative action policies to achieve equal opportunities for people with disabilities, with a view to raising awareness in the trade union world about the rights of this workers as equal citizens," she concludes.

This first meeting was the initial step in a longer process and opened some paths to follow: creating spaces with accessibility, respect, education, opportunity, diversity and equity

This first meeting was attended mainly by allies and a small number of workers with disabilities, which shows that there is a great challenge for the coming period. "We must take advantage of the interest of these allies to reach out to persons with disabilities. We have to question why workers with disabilities are not present in workplaces and in our unions. We have a responsibility to respond to this absence and act to correct it," says Euan Gibb, regional assistant for PSI Interamerica.

During the meeting, Gibb shared PSI's policies and commitments on the issue as set out in the Programme of Action adopted at the PSI’s World Congress in 2017. Earlier, Regional Secretary Jocelio Drummond introduced the meeting by presenting the organization and its regional and global priorities.

During the discussions, two distinct but complementary areas of work were identified: one at the trade union level, promoting the integration of workers with disabilities within our organizations; and the other related to the struggle for the implementation of public policies that serve these social groups, since public workers must be committed to the policies of inclusion and rights developed by the State.

The following next steps were agreed to at this meeting:

1. In the field of public policies, it is important to pay particular attention to the issue of transport, adaptation to urban and rural structures, employability and training for work.

2. In the area of trade unions, it is important for unions to organise spaces for empowerment of workers with disabilities through the creation of committees or other forms of organisation which can influence trade union decisions by incorporating the needs of this group of workers. In terms of communication, it will also be important to be inclusive, as we take requirements into account for access to information (ex- braille for the blind, etc.), as well as the structure of training and education events.

3. Complete a survey of collective agreement clauses specific to workers with disabilities in 2021.

4. Identify national and regional organisations with whom we can establish alliances for joint actions with workers with disabilities.

An unprecedented meeting organized by PSI Interamerica in November brought together leaders from several countries to discuss the challenges of incorporating workers with disabilities into both the world of work and trade unions. 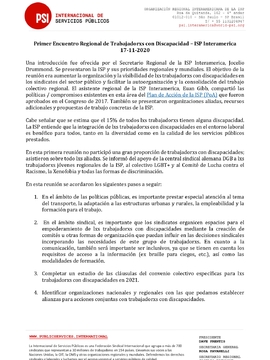 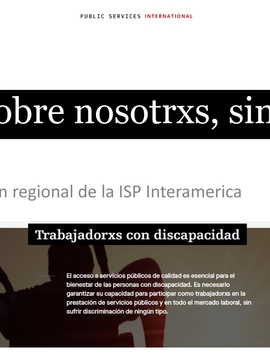