The Energy Charter Treaty (ECT) is a less well-known trade and investment agreement that allows fossil fuel companies to sue signatory countries in private courts if they implement policies to mitigate climate change or provide universal access to energy. It also facilitates privatization of the sector. A new guide co-published by Public Services International identifies the defenders of the treaty, examines their claims, and provides strong arguments to refute them.

The ECT is a treaty that has existed for almost 30 years. It exists to protect the foreign investments of energy corporations. It is currently being “modernized” and expanded. According to Public Services International (PSI) and many civil society organizations, the agreement is harmful in its essence and cannot be fixed. It only serves to strengthen private corporate interests.

The Energy Charter Treaty (ECT) includes 53 countries from Western and Eastern Europe, Central and Western Asia, and Japan, Jordan, and Yemen, as well as the European Union (EU) and the European Atomic Energy Community (Euratom). Negotiators are currently seeking to expand its geographic reach to include Africa, Asia, and Latin America. In Latin America, Chile, Colombia, Ecuador, Guatemala, Guyana, and Panama have already formally started the inclusion process or have expressed interest in doing so.

“It is unbelievable that several Latin American countries are debating adhesion to a treaty from the 1990s, to a treaty of the worst kind, which only promotes the privatization of the energy sector and the consequent increase in tariffs and decrease in universal access to energy; adhesion to a treaty that favors the enrichment of transnational companies and is so clearly contrary to the interests of the population”, says Jocelio Drummond, PSI regional secretary for the Americas.

“It is outrageous that this type of negotiation is carried out in total secrecy, without any public participation, without debate among workers or local and municipal governments, academics, with anyone. The ECT represents a total submission to the interests of the transnationals. We cannot agree with this. We must join forces in the fight against the ECT”, he adds.

The ECT has strong investor-state dispute settlement (ISDS) language that allows fossil fuel companies to sue governments in private international courts in cases where the adoption of any action that impacts their profits, including climate mitigation policies or policies that provide universal access to energy. Governments may be forced to pay huge sums in compensation. By protecting investments in coal mines, oil fields and gas pipelines, the ECT is considered a strong obstacle to the realization of goals identified in the Paris Agreement, the global United Nations treaty that aims to reduce greenhouse gas emissions.

For this reason, the European Commission itself has said that the Treaty is “outdated” and “no longer sustainable”. In response to significant and growing criticism, the ECT member states approved a list of topics to “modernize” the treaty in November 2018. However, many member states question the need for change and have a strong interest in maintaining the energy corporations’ privileges.

This is the context for the launch of the “Busting the myths around the Energy Charter Treaty”. The guide is produced by PowerShift, Corporate Europe Observatory (CEO) and the Transnational Institute (TNI) and has been co-published by several social and civil society organizations, including the Public Services International. The publication aims to help activists, concerned citizens, journalists, and policy makers confront pro-ECT propaganda by identifying the defenders of the treaty and 18 of their specific arguments. The guide is based on extensive research and offers strong counterarguments to refute supporters’ claims. 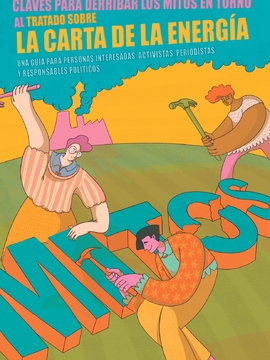 The guide includes a list of “six reasons to withdraw from the ECT or never join it”:

Reason 1: The ECT is the world’s most dangerous investment agreement.

Investor-state arbitration under the ECT is not a fair or independent system to resolve disputes between states and investors. Globally, no other treaty has triggered more investor attacks against states than the ECT. So far, 134 cases and counting. In ECT lawsuits, tribunals of three private lawyers can force governments to pay out billions in taxpayer money to compensate corporations, including for entirely hypothetical missed ‘future profits’.

Reason 2: The ECT undermines democracy and could put the brakes on climate action.

It is a tool to bully decision-makers and make governments pay when they try to reverse the global climate crisis and protect public interests. This is a particular threat to an urgently-needed transition away from fossil fuels, which requires bold regulations that will inevitably curtail profits for some of the largest oil, gas, and coal corporations. The ECT has already been used to attack bans on fossil fuel projects, environmental restrictions on power plants, and the phaseout of coal.

Reason 3: The ECT limits sovereignty and policy space to regulate in the public interest, including for affordable energy prices.

The ECT can be used to impede any type of regulation on energy investments, including taxes. It can also be used to lock-in failed energy privatisations and erode attempts to regulate electricity prices to make energy affordable for all.

Reason 4: The ECT’s investor privileges do not bring the claimed economic benefits.

There is currently no evidence that the agreement helps to reduce energy poverty and facilitate foreign direct investment, let alone investment in renewable energy.

Reason 5: The modernisation of the ECT will not fix its flaws.

The ECT modernisation is an attempt to re-legitimise an outdated, dangerous, and increasingly controversial treaty. Even if governments agree to modernise the ECT, proposals currently on the table will not deliver an ECT 2.0 in line with the Paris Agreement and they will undermine the efforts to achieve a European Green Deal.

Once a country joins the ECT, it is locked in for at least 26 years – even if subsequent governments wish to leave. While any government can withdraw 5 years after ECT accession and its withdrawal takes effect a year later, it can still be sued for 20 more years for investments made before the withdrawal.