PSI has joined dozens of Social Movements and Civil Society organisations across the world to develop our Manifesto for Public Services - our vision of a better world (and how to win it!)

The Future is Public: Global Manifesto for Public Services was developed collectively by dozens of organisations and actors to serve as a rallying cry for public services for civil society, providing a concrete alternative to the dominant neoliberal narrative that has failed to ensure a dignified life for all. The manifesto positions public services as the foundation of a fair and just society and of the social pact that implements the core values of solidarity, equality and human dignity. It advances a series of ten principles for universal quality public services in the 21st century, and outlines how funding universal quality public services is possible.

Join us on the 26th October, 2-4pm UCT to discuss how to reclaim our public services with UN Special Rapporteurs past and present.

PSI has joined dozens of Social Movements and Civil Society organisations across the world to develop our Manifesto for Public Services - our vision of a better world (and how to win it!) 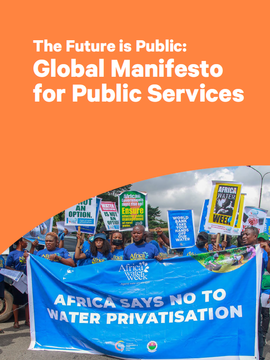 Nine organisations began collaborating in 2020 with the aim of establishing a collective vision that could mobilise a strong broad-based movement to demand public services: ActionAid, the East African Centre for Human Rights, Eurodad, the Global Initiative for Economic, Social and Cultural Rights, the Initiative for Social and Economic Rights, Oxfam, Public Services International, the Society for International Development, and the Transnational Institute.

Add your organisation's name to the manifesto

A key outcome of the civil society workshop was the idea of developing a collective narrative to unite and mobilise a broad-based movement to challenge privatisation and demand public alternatives for the provision of services that ensure the realisation of human rights. A working group was formed, bringing together representatives from 25 organisations from various sectors and regions.

This group met regularly from January to June 2021 to develop a draft manifesto. Input was then sought through a series of regional workshops and online consultations held from June to September, with the feedback being integrated into a revised draft by the working group.

The final version of the manifesto incorporates the comments and inputs received from hundreds of civil society organisations and actors throughout the world. It aims to establish a clear, unifying vision on public services that can be used as a basis for advocacy and campaigning in different contexts, at the local, national, regional and global levels.

The Future is Public: Global Manifesto for Public Services