The speech reproduced below was prepared by PSA NZ’s Georgina Kerr, Kuia (PSA Elder), on the occasion of an International Women's Day 2022 event organised by Public Services International for the Victorian Trades Hall Council's Women's Rights At Work Festival.

Partnership, Participation and Protection are the 3 principles of Te Tiriti o Waitangi. These three principles guide us in our workplace, our homes and within our family structures. Continuous breaches of these principles impact on our daily lives.

How important is it for indigenous women workers to organise for justice?  It is extremely important. We must remain vigilant and resilient to the impact of colonisation on our people at all levels of society.

The Mana Wahine claim is one of our responses. This inquiry examines claims that “raise issues of national significance (in terms of the seriousness of alleged Treaty breaches) that Māori as a whole have experienced in terms of Crown policy, legislation or action/inaction”.

The claimants group consisting of wahine Māori and Public Service Association staff determined that through the use of a survey, they would gather information related to potential breaches across six critical areas. These areas included:

The findings were reported in detail in two documents, the Results report and Nga Kupu o Nga Wahine Māori.

The Results report highlighted three critical areas. These were:

There is clear evidence that the Crown has breached the Treaty of Waitangi by failing to remove individual, organisational and systemic barriers to ensure equal progress under the law.  While efforts to remove such barriers have begun in many organisations, such efforts are neither organisation-wide nor consistent over spaces and time.  Wāhine Māori have continued to bear the brunt of this failure.

We would like to explore further the bias, discrimination and racism endured by individuals at all levels of organisations in education and workforce settings because wāhine Māori of all ages and across all occupations reported significant disadvantage amounting to breaches of the principles of the Treaty of Waitangi.

The effects of a range of individual factors highlighted in the reports impacted on the health and wellbeing of wāhine Māori. These experiences specifically prevented, at times, promotion and progression within workplaces and across all sectors of the union.

2. Organisational factors that created Treaty breaches within education and across workplaces

The numerous interlocking barriers experienced by wāhine Māori in the schooling system and across a range of workplaces identified many barriers. The Crown breached the principles of the Treaty by, in effect, denying a full and culturally safe schooling environment for many wahine Maori. The consequent low levels of educational achievement and wasted or delayed realisation of potential constituted, actual and material barriers to progress in economic and social life for wāhine Māori.

Organisational barriers in schooling included teacher bias, the existence of streaming which deprived those in lower streams of education opportunities, systematic placement of many Māori in lower educational streams, racial discrimination by both teachers and other students, being taught anti-Māori views of history and being denied opportunities to learn to reo Māori.

Efforts to implement the principles of the Treaty of Waitangi in the workforce have mixed results.  Good Treaty work is identified in many areas of organisations. At the same time, significant unevenness is discussed by wāhine Māori between different layers of the organisation, in formal and informal processes and across a range of cultural practices.

What we know is that structural and systemic barriers in the workplace emerge from the hierarchical systems that control policy, resources and operations. Even in agencies that hold explicit Treaty principles within their legislative frameworks or organisational forms, such principles are often not in sight further down hierarchies, where managers and team-leaders, in never-ending cascades of hierarchy, control the culture and systems of work.

Racism creeps in through the holes, the gaps in such systems and distorts the purpose and work programmes.  Therefore, even organisations that proclaim strong Treaty relationships can harbour racist practices. A key victim group is wāhine Māori.

There is no place for formal resistance to Treaty goals within many workplaces, so these resistances play out as a stream of racist talk and actions at both informal and formal levels.

For those not charged with cultural work, there is still a price to be paid for being wāhine Māori in the workplace. Systemic barriers mean that in some workplaces and at all times, there are none or virtually no wāhine Māori holding senior management positions.

In Māori kaupapa organisations there is respite from structural racism. But it may impinge, nevertheless, in the undervaluing of Maori service organisation. These services are likely to be underfunded for what they have to offer, leaving staff with lower wages than in comparable public sector services.

It is true, there can be no climate justice without gender justice and racial justice.

How Maori women are fighting discrimination

Maori women have faced discrimination, especially at the workplace, for decades. In a podcast produced by Public Services International three Maori women describe their experiences. They were interviewed by Trimita Chakma, a PSI Communications and Campaigns Consultant. 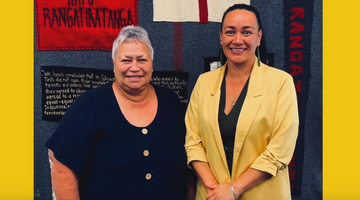