Two years ago, in April 2018, unions from every PSI region successfully negotiated new ILO guidelines to ensure decent work in public emergency services (PES). Little did we know that the coronavirus would sweep the planet, putting emergency workers in the frontlines of global attention. Nor that these workers would lose their lives in service needlessly for lack of personal protective equipment – PPE

Austerity budgets following the global financial crisis of 2008 had thinned the ranks of health and social services and depleted stocks of medical supplies. In many instances, governments capped or even reduced the already low wages of health workers, the majority of whom are women. Coupled with short staffing, this resulted in a toxic work environment, where many staff left, stressed out and burned out.

Health migration became a key strategy for many health services, in effect a brain drain on developing countries, which trained these workers, only to see them leave for rich countries. The upshot of all this is that many thousands died of Covid-19.

The definition of PES workers is broader than just first responders of fire, police, ambulance and emergency medical technicians.

The PSI strategy going into the 2018 meeting was to connect PES to the needs of the communities, where our members live and work. Thus, there is an important recommendation that PES should not be privatised (para 35: “PES have an extremely strong public nature and in principle should not be privatized or contracted out.”), and that PES should not be subject to fiscal austerity (para 33). And that PES workers should conduct simulations with the communities as part of their training.

The definition of PES workers is broader than just first responders of fire, police, ambulance and emergency medical technicians. It now includes workers in utilities, local and regional governments, health and social services. They all deserve the extra training and protections for when they will be involved in PES, even if this is not their primary function. The PES guidelines acknowledge the importance of social dialogue mechanisms in many areas of decision-making – decisions are more solid if PES workers and their unions are involved from the start.

Governments and employers agreed protections for workers. First and foremost are the Fundamental Principles and Rights at Work (paras 25 & 26), which mean that PES workers have the right to organise and form unions and to bargain terms and conditions. Further, the guidelines indicate that ‘states of emergency’ should not be used as a pretext to curtail these rights (para 102). However, many countries are doing exactly that under the pandemic, limiting worker (and other) rights in order to appear to be in control.

These ILO Guidelines encourage governments and Public Emergency Service employers to provide workers with adequate means, tools and resources to be able to respond effectively to emergencies. They can be used by unions to lobby for increased protections for front line workers. 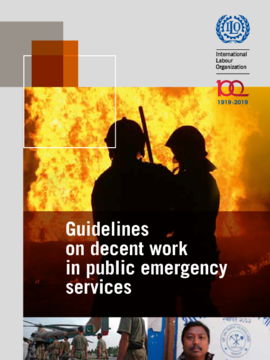 Given that many PES are deemed ‘essential services’, workers who are refused the right to strike must benefit from impartial collective dispute resolution mechanisms (para 105). This is an implicit recognition of the right to strike, which has been under attack in the ILO for some years. PES workers also have the right to refuse unsafe work and the right to adequate tools and training, such as field exercises – including with the community.

PSI succeeded in bringing in detailed text on personal protective equipment (PPE), which is the ultimate barrier preventing injury or death to PES workers – when all other methods have failed (section D). PES employers must provide the appropriate PPE according to risk, and maintain this equipment, at no cost to PES workers. During the pandemic, this has proven the Achilles heel of many health systems as governments abandoned the notion of keeping stock on hand – too expensive – and where the production capabilities were outsourced some were down the global supply chain.

The guidelines set a new standard for volunteers in PES : even though not PES employees, they are workers and must benefit from fundamental principles and rights at work. However, ‘no volunteer should be asked to carry out any work or activity that is not commensurate with the training they have received and for which they have been assessed as competent. (Para 122). Further, ‘[t]he use of volunteers should not impair the coordination of PES, substitute PES workers, or undermine the wages or working conditions of other PES workers, or be used to justify the understaffing or underfunding of PES.’

The guidelines should be used by unions to :