PSI joins a global coalition to challenge the power of Amazon: the corporation at the very center of the crises of climate breakdown and economic inequality that grip our planet.

Try it out here at our Museum of Missing Nurses.

Solidarity is the vehicle to deliver this world. Making Amazon pay is where we start.

Article by Casper Gelderblom: member of the Progressive International’s Secretariat and PI Coordinator of the #MakeAmazonPay campaign.

Amazon’s size and power place the corporation at the very center of the crises of climate breakdown and economic inequality that grip our planet. The growth of CEO Jeff Bezos’s astronomical wealth — up $100 billion since March, now surpassing that of any other human in history — is directly proportional to Amazon’s human and environmental costs: his corporation mistreats its workers, wrecks the climate, and undermines the public institutions underpinning our democracies along the way.

Taking on Amazon, therefore, will require more than curbing Jeff Bezos’s personal wealth or calling for corporate social responsibility. It will require a global movement that is organized along every dimension of Amazon’s expanding empire: for workers, for peoples, and for the planet.

As part of our recently launched Museum of Missing nurses, we've created a simmulator to show how the Public Revenue generated by fairer taxes on Amazon's profits could be better spent on Frontline services

That is why today an international worker-activist coalition begins a planetary mobilization to #MakeAmazonPay. From Sao Paulo to Berlin, Seattle to Hyderabad, activists will project this rallying cry onto key Amazon sites, putting the corporation on notice that its days of impunity are over. Bringing together unions, environmentalists, and citizens around the world, this coalition exercises the only power that can meet the force of transnational capital: solidarity.

In just a few years, Amazon has established itself as a key node in the circuitry of globalized capitalism. Having first revolutionized the links between production, distribution, and consumption on its digital platform, the corporation’s cloud infrastructure and e-commerce give Amazon controlling influence over huge swathes of social and economic life across the planet.

Amazon’s network of corporate power extends through our workplaces and into our lives. Producers and suppliers have no choice but to partner with Amazon to retain or gain access to consumers. Consumers, for their part, feel that they can hardly avoid Amazon, unless they are willing to wait longer and able to pay more. Through mass surveillance technology like Alexa, Echo, and Amazon Ring, the corporation has infiltrated millions of households and collected their most intimate data.

PSI teams up with Progressive International and warehouse workers, climate activists, and social movements around the world in a global day of action against Amazon.

The time has come to #MakeAmazonPay

Across this network sits Amazon Web Services, which has played a key role in the operation of extractive industries and law enforcement; as well as Amazon’s recent ventures into sectors like financial services, food provision, and health care. Amazon has, in effect, become a wholly unaccountable, predatory transnational private state – or, indeed, a 21st-century empire.

In the absence of a common movement to challenge it, Amazon has managed to expand its empire to all corners of the global economy. But the tide is beginning to turn. Tech workers’ recent participation in the global climate strike was followed by important concessions by Amazon management, and transnational labor alliances led by UNI Global Union and Amazon Workers International have managed to integrate previously diffused worker resistance. Internationally, public advocacy groups have moved the urgent need to break up Amazon towards the heart of policy debates.

These efforts show us the way forward. To Make Amazon Pay its debts to workers, the planet, and society, we must pursue a three-point strategy:

These are the goals of the campaign that launched today.

With respect to the first, our coalition’s Common Demands are global in their scope. We realize that Amazon’s power depends on its ability to exploit differences in national jurisdictions to drive on the global race to the bottom on social and environmental protections.

We recognize, too, the intersections of Amazon’s injustice. The environmental injustice of Amazon’s pollution, for instance, disproportionately affects people of color. The corporation’s monopolization of the cloud computing sector, meanwhile, is the basis of its close ties with Big Oil. Our coalition therefore brings together the environmentalists of Greenpeace and 350 with groups like Data 4 Black Lives, the Athena Coalition, and the Hawkers Federation of India.

With respect to the second point of strategy, today’s action unites workers across Amazon’s supply chain — from the tech workers in Amazon’s Seattle headquarters and warehouse workers organized by UNI Global Union affiliates, the Awood Centre, and Amazon Workers International, all the way to supply chain workers in garment factories in Bangladesh.

And with respect to the third, our coalition does not demand that Jeff Bezos change Amazon’s business model out of the goodness of his heart. Instead, the movement aims to build legislative power that can put an end to the “Amazonification” of our economies and societies. We invite progressive lawmakers across the globe to join us, and stand with this global movement to Make Amazon Pay.

The mission of this campaign is as simple as it is radical: to win a different world.

A world in which economic activity does not lead to climate destruction, but to environmental reconstruction and flourishing.

A world in which markets are governed by democratic institutions, rather than vice versa. Solidarity is the vehicle to deliver this world. Making Amazon pay is where we start.

PSI in the News

This Black Friday, a global coalition is holding Amazon to account | Casper Gelderblom

Jeff Bezos’s company has made vast profits at a huge cost. #MakeAmazonPay is standing up to it, says Casper Gelderblom of the Progressive International 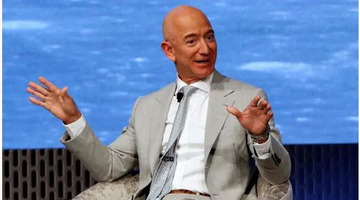