“Building walls, building fences, is not a solution […] the issue is how we can receive these people with fairness, with justice, with equity,” says PSI General Secretary, Rosa Pavanelli in her opening speech on the eve of the Intergovernmental Conference to Adopt the UN Global Compact for Safe, Orderly and Regular Migration in Marrakesh.

“People have always moved around the world, that they will continue to do. The issue is how we can receive these people with fairness, with justice, with equity and this is why our approach to the Global Skills Partnerships (GSP) is about building bridges and breaking walls,” she added. 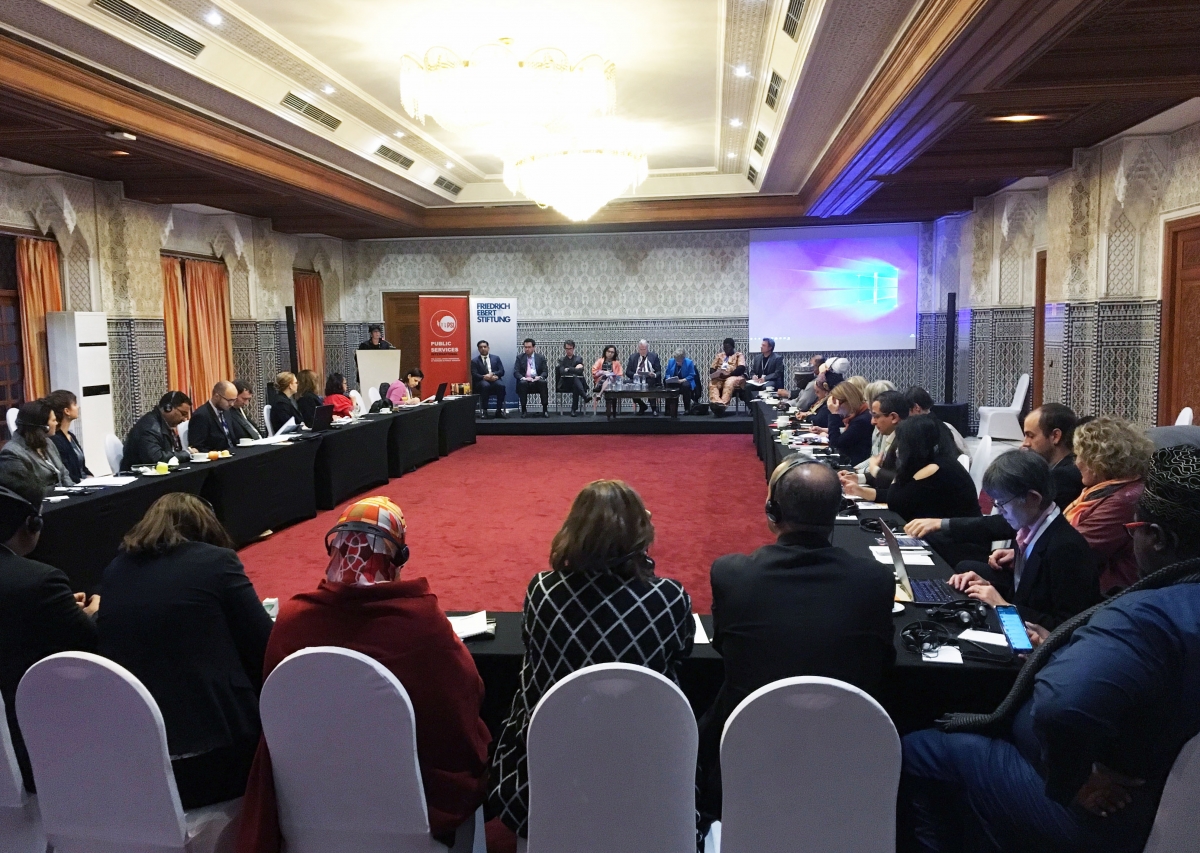 This concluded Rosa Pavanelli’s opening speech on 9 December at the side-event in Marrakesh to promote a Stakeholders' Dialogue on Health Worker Migration and the Global Skills Partnerships. The side-event was organised by PSI, with the support of EPSU, WHO, FES and the German Federal Government, on the eve of the Intergovernmental Conference to Adopt the UN Global Compact for Safe, Orderly and Regular Migration. 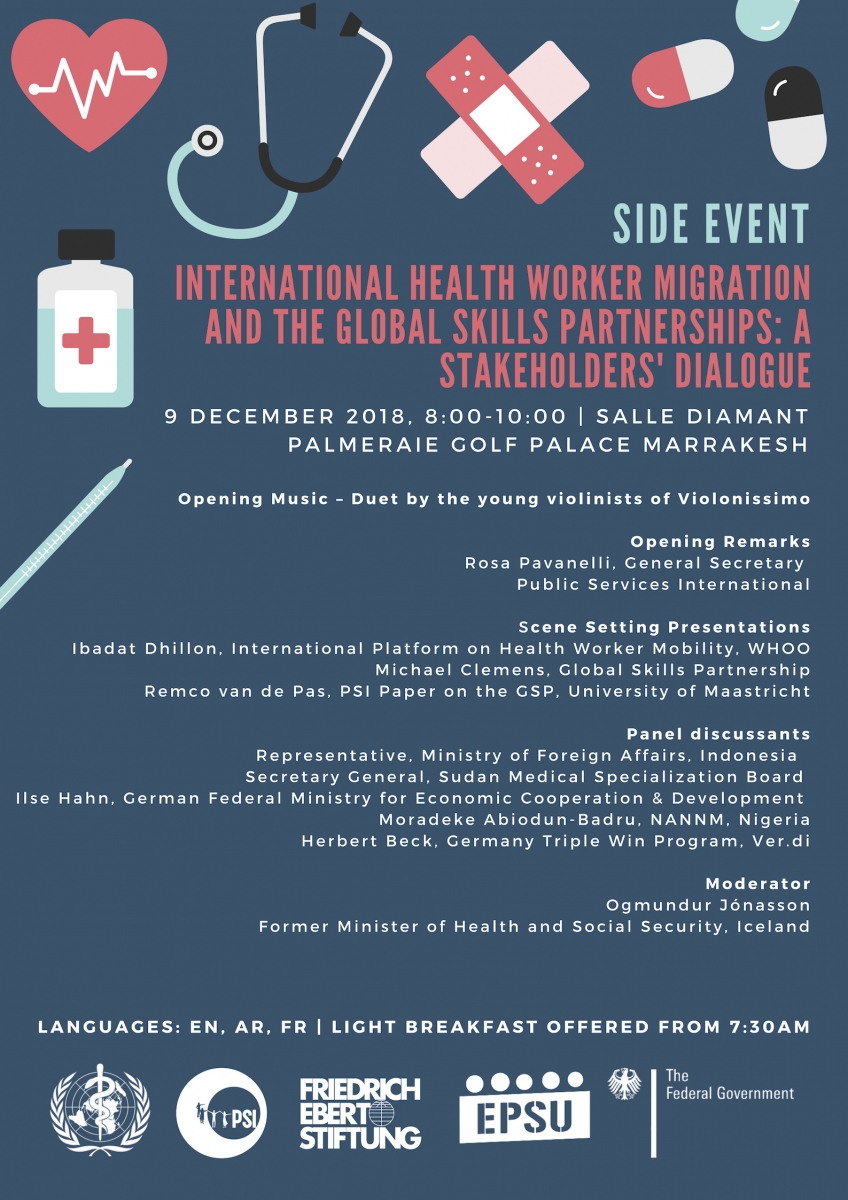 The side event commenced with a Duet from the young violinists of Violonissimo. Followed by a speech given by PSI General Secretary Rosa Pavanelli. 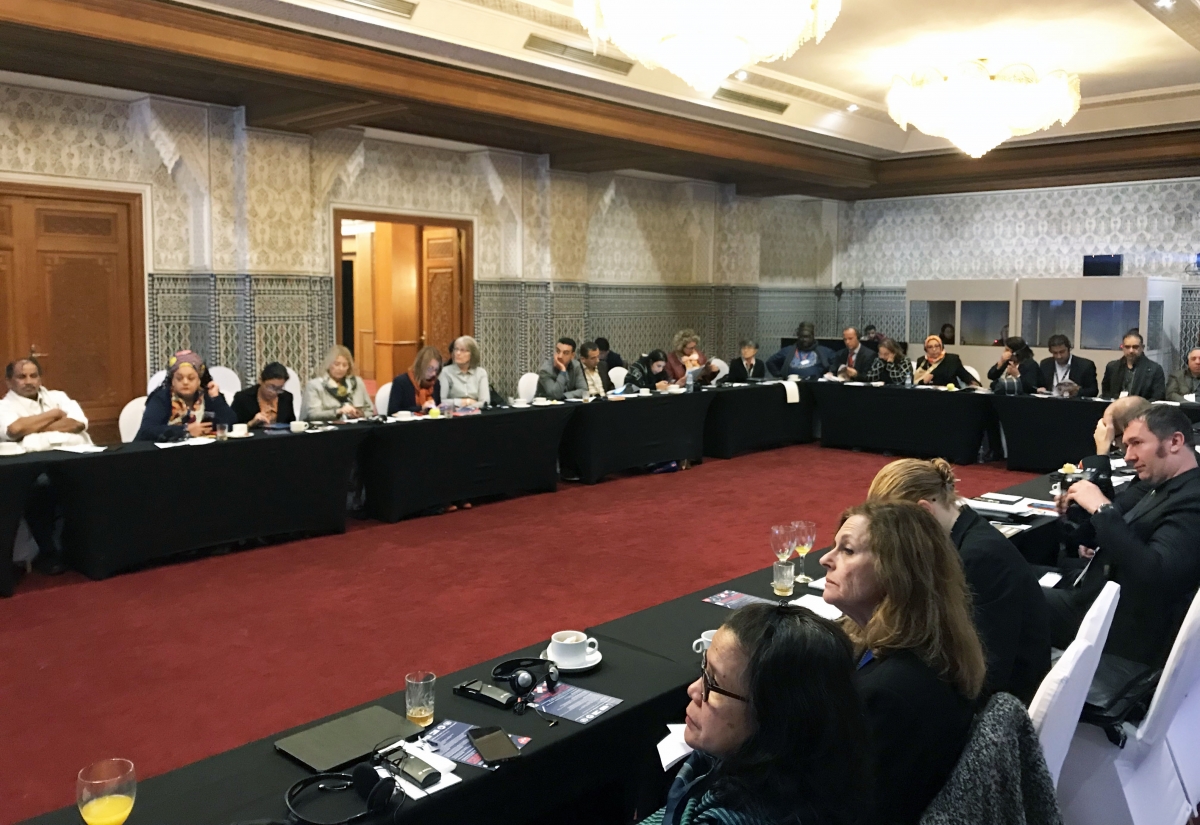 [Rosa Pavanelli comes to the podium, thanks Danielle and Gabrielle Yu from Violonissimo, the school for young violinists based in Geneva. Highlight how music, arts and culture can be a unifying force, brings energy and elevate conversations. Describe how Violonissimo is founded by Ms. Hong-Anh Shapiro, a violinist and known for her unique pedagogy of teaching violin music for children as young as 3 and ½ years old. Hong-Anh is a former refugee, and like many refugees and migrants bring enormous social, economic, cultural contributions to our societies.]

* Ögmundur Jónasson (Biography):  Ögmundur Jónasson, born in Iceland 1948, is a historian from the University of Edinburgh, was editor of foreign news at Icelandic State TV until he became chairman of the Federation of State and Municipal Employees in Iceland 1988 - 2009. In this period, he sat on the Executive board of Nordic, European and international trade union organizations, including PSI. He was a Member of the Icelandic Parliament 1995-2016 and was Minister of Health and Minister of Interior in the Icelandic government in the period 2009-2013. At present he is a member of the European Commission against Race and Intolerance and Honorary Associate of the Parliamentary Assembly of the Council of Europe. Most of his working life he has been part-time lecturer in history at the University of Iceland and a writer and commentator. 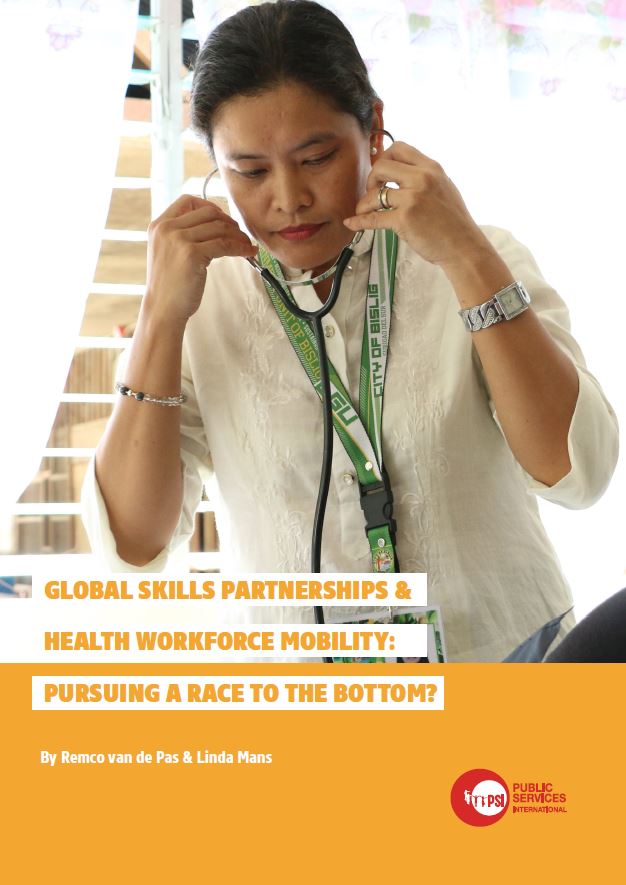 This discussion paper "Global Skills Partnership & Health workforce mobility: Pursuing a race to the bottom?" was commissioned by PSI for the "Stakeholder's Dialogue on International Health Worker Migration and the Global Skills Partnerships". A side-event of the "Intergovernmental Conference to Adopt the UN Global Compact for Safe, Orderly and Regular Migration". This paper is still in draft format, a final version will be published by PSI in January 2019.

Click here for a .pdf version of the study.