PSI is concerned with the ongoing repression involving the disappearance of activists, disregard for basic human and worker rights and mass arrests.

Attempts to isolate the democracy campaign by cutting internet and telephone access has not contained or demobilised local outrage, but has made the democratic forces more determined than ever.

A genuinely democratic Eswatini based on universal suffrage, equality, the lifting of restrictions on party activity, and placing the needs of the poor at the top of the agenda is now the only way forward. The dominance and chronic wastefulness of the Royal Household must end. The King and his hangers on have failed the people of Eswatini and must now be held to account.

Working class solidarity is needed now more than ever.

Working class solidarity is needed now more than ever. Unions must remain in the fore with their demands for a genuine democratic system, and to stand firm against any attempt towards a ‘compromise’ that allows King Mswati and his dependent elite to regain the upper hand. This monarchy has brutally suppressed working class organisation for decades. It cannot go on and has forfeited its right to govern.

The workers movement in standing beside all those calling for democracy, is ready to use its power and organising capacity to build unity amongst all of the oppressed, and to help articulate a popular alternative to rule by Royal Decree. Now is the time for peoples power to express itself.

We call on our affiliates to show their support by sending the Trade Union Congress of Swaziland, TUCOSWA, messages of solidarity, and to discuss how best we can practically support our comrades in Eswatini in their hour of need.

PSI stands in solidarity with the people of Swaziland as they engage in civil action calling for democratic independent elections and an end to the Tikhundla system of rule. 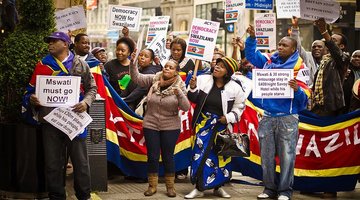