The General President, R. Sadien addressed the meeting and highlighted the various situations of precarious work conditions prevailing in the Civil Service Sector. These include workers on short-term contracts, casual workers, agency workers, migrant workers, the enlistment of young graduates on determined contracts, and resorting to the services of retired employees to temporarily cater for unfilled vacancies. 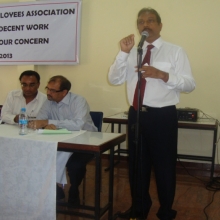 In his address to the meeting, The Minister of Civil Service & Administrative Reforms, the Hon. S. Moutia, assured participants that he had taken good note of the representations made and would transmit these to his colleague Ministers. He reiterated the government’s commitment to adhere to the Decent Work Country Programme Agreement signed in 2012. However, he conceded that there were still improvements to be made in a variety of areas and urged unions to make use of the funds available under the Work Enhancement Programme by submitting projects for the betterment of workers.

Participants were then invited to reflect in small groups on concrete actions that can be initiated in the short run to address the issue of precarious work in Mauritius.  Participants adopted the following resolutions: