The figure, revealed in new Amnesty International report "Exposed, silenced, attacked: Failures to protect health and essential workers during the Covid-19 pandemic", is nevertheless likely to be a significant underestimate

Governments must be held accountable for the deaths of health and essential workers who they have failed to protect from Covid-19, Amnesty International said, as it released a new report documenting the experiences of health workers around the world.

The organization’s analysis of available data has revealed that more than 3000 health workers are known to have died from Covid-19 worldwide - a figure which is likely to be a significant underestimate.

It is especially disturbing to see that some governments are punishing workers who voice their concerns about working conditions that may threaten their lives.

Alarmingly, Amnesty International documented cases where health workers who raise safety concerns in the context of the Covid-19 response have faced retaliation, ranging from arrest and detention to threats and dismissal.

“With the Covid-19 pandemic still accelerating around the world, we are urging governments to start taking health and essential workers’ lives seriously. Countries yet to see the worst of the pandemic must not repeat the mistakes of governments whose failure to protect workers’ rights has had devastating consequences,” said Sanhita Ambast, Amnesty International’s Researcher and Advisor on Economic, Social and Cultural Rights.

“It is especially disturbing to see that some governments are punishing workers who voice their concerns about working conditions that may threaten their lives. Health workers on the frontline are the first to know if government policy is not working, and authorities who silence them cannot seriously claim to be prioritising public health.” 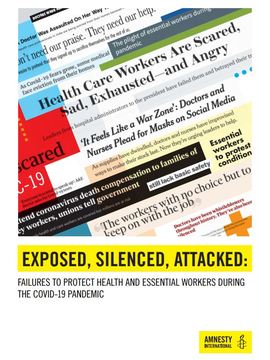 Thousands have lost their lives

There is currently no systematic global tracking of how many health and essential workers have died after contracting Covid-19.

However, Amnesty International has collated and analysed a wide range of available data that shows that over 3000 health workers are known to have died after contracting Covid-19 in 79 countries around the world.

Click on the map below for more information on each country

The overall figure is likely to be a significant underestimate due to under-reporting, while accurate comparisons across countries are difficult due to differences in counting. For example, France has collected data from just some of its hospitals and health centres, while figures of deceased health workers provided by health associations in Egypt and Russia have been contested by their governments.

Health workers reported serious shortages of personal protective equipment (PPE) in nearly all of the 63 countries and territories surveyed by Amnesty International.

This includes countries which may yet see the worst of the pandemic, such as India and Brazil and several countries across Africa. A doctor working in Mexico City told Amnesty International that doctors were spending about 12% of their monthly salaries buying their own PPE.

In addition to a global shortage of supply, trade restrictions may have aggravated this problem. In June 2020, 56 countries and two trade blocs (the European Union and the Eurasian Economic Union) had put in place measures to either ban or restrict the export of some, or all, forms of PPE or its components.

“While states must ensure there is sufficient PPE for workers within their territories, trade restrictions risk exacerbating shortages in countries that are dependent on imports,” said Sanhita Ambast.

“The Covid-19 pandemic is a global problem that requires global cooperation.”

In at least 31 of the countries surveyed by Amnesty International, researchers recorded reports of strikes, threatened strikes, or protests, by health and essential workers as a result of unsafe working conditions. In many countries, such actions were met with reprisals from authorities.