PSI in Ecuador and two other organizations published this statement and two others on the situation of the public sector and its workers after the declaration of COVID-19 health emergency in the country. The earlier statements were published on March 13th on the government’s economic measures and on April 3rd on the situation of frontline workers in emergency health care.

For over three decades of neoliberal and “post”-neoliberal policies in Ecuador, the State and its resources have been controlled by national and transnational capital. The COVID-19 health emergency makes it clear that public goods and services are the only material sources of support in a crisis. No privatization process, whether through the outsourcing of services, concessions, or public-private alliances, will provide solutions for the poorest and most vulnerable communities of our country.

Privatization in all its forms brings corruption; the two are kindred spirits and accomplices. Corruption is rife in Ecuador. It exists through the accumulation of capital by local power elites, who traditionally have controlled the State, and acted as intermediaries between the State and the private sector, facilitating privatization and dismembering the public sector. This development took place during the previous decade when government revenues experienced the greatest boom in history because of high international prices for raw materials and the consolidation of Ecuador within the international market as an economy based on extractive industries. This bonanza enriched both local and transnational capital and filled the pockets of the main officials of the Alianza País regimes, through a variety of corrupt practices, some of which are now being aired in the country’s courtrooms while others still go unpunished; and the persons responsible for this corruption are free, living both inside the country and abroad. There was a glimmer of hope that the judicial system could confront this impunity; however, the political crises and now the COVID-19 emergency interrupted this process and using a false anti-corruption rhetoric, powerful elites and “new” State intermediaries associated with the old ultra-right parties have captured control.

Guayaquil and all of Ecuador have suffered from the dismantling of the public sector by populist national and local governments of all political persuasions in power during the neoliberal and “post”-neoliberal periods. In parallel with this public sector dismantling, public sector trade unions were targeted, through co-option, division and the removal of leaders, thus silencing the voices of workers who in the past had managed to win important battles against privatization, with the support of the general public.

Privatization: the 2008 Constitution of Montecristi declared that universal access to health is a fundamental right, without mentioning public ownership, thus paving the way for the transfer of health care to the private sector, due to over-crowding and lack of resources in the public system. Since then, most of the budget for public health and social security has ended up in the pockets of the private health services via the transfer of services; and a process called “centralization” of the health system was put into motion, which dismantled the public provision of specialized health care. Particularly in Guayaquil, the consequence was the closure[1] of the Alfredo J. Valenzuela Pulmonology Hospital and the Leopoldo Izquieta Pérez National Institute of Hygiene; the first was responsible for all respiratory diseases, and the second in charge of epidemiology. Their work was taken over by the National Institute of Public Health and Research (INSPI), set up according to the super State[2] model with increased powers and a mega apparatus at central level, the best partner of capital. At the same time a surreptitious process was initiated to sell off the assets of the Ecuadorian Institute of Social Security - IESS, one of several factors leading to the current crisis in 2020, the most significant in the history of social security in Ecuador.

Dismantling of trade unions/professional associations and redundancies: In 2008 a crusade to weaken the health sector trade unions and professional organizations began, when the former Constitutional Court declared that mandatory affiliation to such organizations was unconstitutional[3], thus resulting in a severe loss of membership and income for the professional associations and federations of physicians, nurses, obstetricians and other medical professions. In the same year, Constitutional Mandate 8 permitted the unilateral review of public sector collective agreements. The union agreement of the Ministry of Health (Organización Sindical Única Nacional de Trabajadores del Ministerio de Salud-OSUMTRANSA) was one of the first agreements to be reviewed, which basically led to the loss of trade union rights for what had been one of the strongest national organizations in the public sector. The year 2011 marked the start of the attack on health workers, which still continues today, with the purchase of compulsory resignations through Executive Decree 813. Approximately 2000 persons in the professional and operational health sectors left in that year alone[4], a situation which led to the resignation of 184 specialists who were never replaced, for instance in pulmonology. This reduction in health personnel continues today and the numbers of workers who have formal contracts in the public sector has been severely limited. In 2019, following on from the declaration of fiscal adjustment and reduction of the State, 2,512 health workers were dismissed. They had been on precarious work contracts all these years, and included 900 personnel from Zone 8 (Guayaquil, Durán and Samborondón). In the midst of this attack against the collective action, independence and autonomy of workers’ organizations, in 2014, a new penal code was adopted (Código Orgánico Integral Penal-COIP), which included a focus on the penalization of bad professional practice, which also had an important influence on health professionals.

De-financing, submission to multilateral credit organizations and loss of sovereignty: the available data concerning the percentage of public expenditure allocated to health over these years makes comparative analysis very difficult. In 2011, the percentage allocated to the health sector was reported at 6.8%; whereas in 2018 it was claimed that the amount would be higher than external debt servicing payments i.e. US$ 6,459,000; in 2019 it was stated that 0.5% of GNP was to be allocated to the health sector; and in 2020, on March 10th, it was announced that the health sector would not be affected by the decision to cut public expenditure, because of the international economic crisis brought on by falling petrol prices as a consequence of the COVID-19 global emergency. On March 21th the Health Minister resigned, claiming that the Ministry lacked the necessary financial resources to address the COVID-19 health emergency. The Finance Minister denied that was the case, and a few days later, on March 24th, the Government announced it planned to pay the outstanding balance of US$ 324 million corresponding to the 2020 external debt bonds, in order to maintain access to external funding sources. At the same time the Minister announced new loans to the value of US$2 billion: US$ 500 million from the International Monetary Fund (IMF); and US$ 500 million each from the Inter-American Development Bank, the World Bank, and the Latin American Development Bank, over and above the existing US$ 1 billion of bilateral debt with China. It is estimated that the COVID-19 crisis in Ecuador will lead to an economic downturn of between 3.6% and 6% in 2020.

Corruption: it is estimated that Ecuador lost around US$ 35 billion due to institutionalized corruption during the decade of Rafael Correa’s government; his ex-Vice President Jorge Glass is now in prison and several other members of his government have been granted political asylum abroad. On February 10th, the first trial in which Rafael Correa is directly implicated opened, in a case concerning bribes in exchange for public contracts, known as the ‘Green Rice’ or ‘Arroz Verde’ case. On April 7th, the ruling of the first instance court was due. Those implicated in the case and their political allies at national and international level have waged a forceful campaign of political destabilization in Ecuador to gain political advantage. During the last few days the campaign has focused on the exacerbation of the crisis in Guayaquil due to COVID-19. But the plot thickens – another corruption scandal is flourishing – no more no less than in the Social Security Institute, due to the emergency acquisition of medical equipment and supplies to the amount of US$10,017,754.50 to meet the COVID-19 emergency. This material included overpriced N95 respirators and other supplies, but this purchase has been stopped. However, the Ombudsperson (Defensoría del Pueblo) has also denounced two other cases in the IESS associated with irregular public health procurements associated with the health emergency.

Disinformation, authoritarian control, “fake news” and evidence of a crisis situation: On March 11th, the Emergency Operations Committee (COE) was put in charge of the COVID-19 health emergency. This COE had been set up in 2016 after the earthquake that hit the Province of Manabí. One of its responsibilities is to provide official figures of the national situation including confirmed cases, suspected cases, deaths, and discharged cases, disaggregated by each province. The first case of COVID-19 reached Guayaquil on February 14th and was confirmed positive on February 27th. Ever since, the rate of infections in Guayaquil has been increasing and on April 4th, there were 2,402 confirmed cases in Guayaquil alone, representing 69.3% of the national total, and 6,165 tests had been carried out in the city. From March 19th, various news items began circulating in social media and some mass media, concerning complaints by health personnel about lack of protective equipment when treating patients with confirmed cases of COVID-19; these workers faced reprisals[4] designed to cause fear and to stop the complaints which contradicted official information about the pandemic.

At the same time, the credibility of the official information about the number of cases started to be questioned, particularly in Guayaquil, where there was evidence that the public health system was overburdened, that the number of deaths from COVID-19 was under-reported and the burial procedures inadequate. From April 1st, a storm of media at both national and international level alerted the world to the crisis in Guayaquil. There were reports by the BBC in London; Tiempo in Colombia, TELESUR, RPP Noticias, France 24, Perú 21, RT, El Mundo, EFE, ALETEIA, amongst many others focusing on the situation in Guayaquil. The Ecuadorian government responded in two ways: it denounced conspiracy and destabilization plans and at the same time accepted that there was under-reporting in the official data.

The country is on the verge of collapse. It is clear that over several decades the State and the public policies have worked to the detriment of the most vulnerable. Populism has been strengthened as a ruling system by all the governing political parties in order to promote the accumulation of capital; trade unions have been weakened and public sector workers have been left without protection and thus neutralized so that they cannot make their voices heard. The public health system is paying the price and each death is evidence of the dire conditions that surround us.

Our objective and our action will be to fight relentlessly to:

Stop Privatization and Corruption in Ecuador!

Consolidate Class Unity in this Struggle!

Let us fight so that COVID-19 does not kill us, stop us or neutralize us!

In the Defense of Public Goods and Services and their Workers!

[1] The websites with news about the closure of these health institutions in 2011 have in turn been closed down, such as http://www.ecuadorinmediato.com/index.php?module=Noticias&func=news_user_view&id=180750 and www.investigacionsalud.gob.ec

[2] In the imaginary, a strong state, with a growing and privatized apparatus, appears as not possible. But that was the political-economic project implemented in Ecuador in the decade of the so-called Socialism of the 21st Century, where the State became the best ally of capital.

[4] There are no official public figures concerning the number of dismissals in the public sector, particularly in the health sector because of the compulsory resignation system of Decree 813 which began in 2011 and continues to be applied today, despite the protests of the current authorities. It should also be noted that dismissals under this Decree took place not only in the health sector but in all other sectors of public administration at central, provincial and municipal levels, as well as in other State branches including the judiciary. 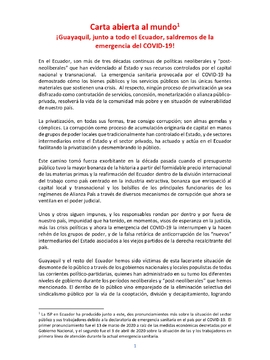