PSI condemns the military coup perpetrated in Myanmar and stands in solidarity with the frontline health workers taking industrial action in more than 70 hospitals to demand democracy.

The people of Myanmar endured repressive military rule for decades before winning partial democracy in 2015. The November 2020 elections overwhelming rejected the military-backed party and clearly indicated the people’s desire for an entirely civilian government. The arrests of newly elected representatives on the 1st of February to prevent the new parliament being sworn in, and the appointment of a military government, are an assault on human rights and the rule of law.

PSI supports the statement of the Confederation of Trade Unions Myanmar (CTUM) which strongly opposed the military takeover. We join them in calling for the release of arrested political leaders and the restoration of the parliament.

Health workers across at least 70 hospitals have bravely led a workers and civil society movement to reject the military grab for power and demand the restoration of the elected parliament.

Health workers of Myanmar have requested the support of other health workers around the world. PSI, as the global union representing health sector unions, will share their request and their struggle with our affiliates.

We call on governments and global institutions to condemn the military coup and arrests, cease any funding to the Tatmadaw (military of Myanmar) and recognise the democratically elected representatives as the government of Myanmar.

In a letter to the international community, medical staff said they would "only listen and follow the instructions from our democratically elected government." 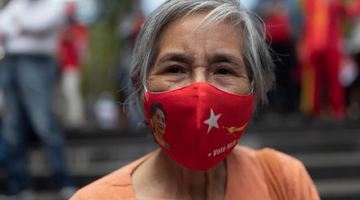