The West Africa Health Sector Unions’ Network (WAHSUN) launched its Health for All West in Africa Campaign, in Abuja, Nigeria on 10 April 2018. This is the sub-regional momentum of the PSI global campaign for the Right to Health. 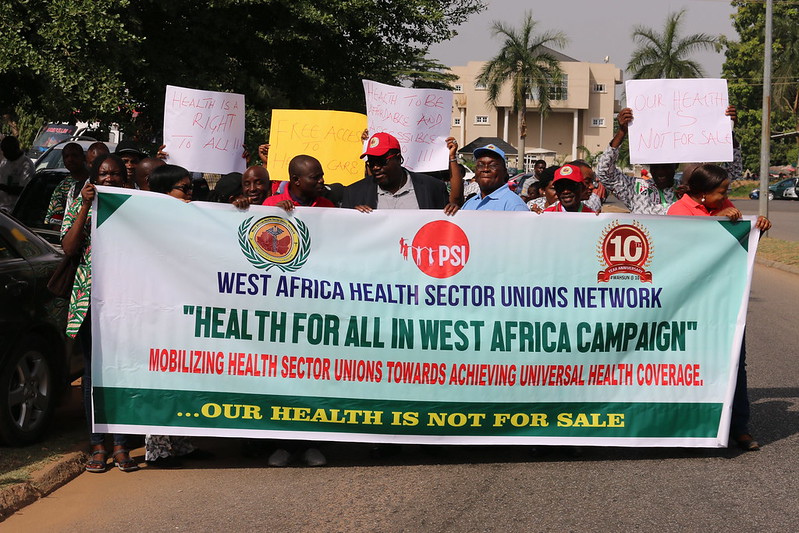 The launch, which took place concurrently with the 10th anniversary celebrations of the Network brought together hundreds of health sector union members from across the West African sub-region as well as officials of international organizations, regional inter-governmental health organizations, civil society organizations and academics.

The theme of the two-day event was mobilizing health sector unions towards achieving universal health coverage. The following sub-themes were addressed in different sessions:

Speakers were drawn from the WAHSUN member unions in both English-speaking and French-speaking countries; the International Labour Organisation; West Africa Health Organisation, and; civil society organisations.

In his welcome address, Chairperson of WAHSUN, Abdrafiu Alani Adeniji spoke on how the Network had become a platform for bringing the solidarity of health workers to bear in weathering the worst storms faced in the line of their work, under challenging political-legal circumstances.
He said the celebration of 10 years of WAHSUN was necessary to showcase what has been achieved and also project for the future of the sub-regional body:

Some countries see this Network as a human rights activist organization but our work is to fight for universal health coverage for the masses in line with the guidelines of the WHO even though we recognize that healthcare services in this region is highly challenged.

Abdrafiu Adeniji said the embargo on recruitment of health service workers in some countries continues to be a challenge for its member unions, condemning the fast-spreading attempts by governments in the region to privatize healthcare delivery.
Some of the achievement of WAHSUN in the last 10 years include:

PSI Health and Social Services Officer, Baba Aye, who was the first Coordinating Secretary of the Network presented a brief history of WAHSUN, putting the problems and prospects ahead in perspective. He pointed out that WAHSUN started as a Network of 4 unions from 4 English-speaking countries on 9 November 2007 but now encompasses 14 unions from 10 out of the 15 countries that make up the Economic Community of West African States (ECOWAS), including both English and French-speaking countries.

Everline Aketch, PSI Sub-Regional Secretary for English-Speaking East and West Africa, extended PSI’s gratitude to WAHSUN for setting the pace and for being a benchmark of good practice within the health sector as well as other sectors within the region:

One thing that makes us really proud of you is your ability to show solidarity in areas where other organizations are not able to do so. A good case was during the outbreak of the deadly Ebola. And so, we want to commit ourselves as PSI, to continue providing you with support in terms of making WAHSUN better through technical and moral support so that we see WAHSUN grow.

There were other contributions from the International Labour Organisation (ILO), Wife of the Senate President of the Federal Republic of Nigeria, Health Sector Workers Union (HSWU) Ghana, representatives from Liberia, Mali, Burkina Faso, Sierra Leone among other representatives.
Launch of Health for All West in Africa campaign
“Health for All is a possibility and our countries can raise the resources for this if they tackle corruption and tax justice.”
The sub-regional launch of the PSI Right to Health global campaign, as “Health for All in West Africa” formed part of the 10th year celebrations of WAHSUN. The campaign was launched by Ms Jemirigbe, representing the Nigerian Minister of Labour and Employment, Dr Ngige.
To officially demonstrate commitments to the campaign, all participants at the celebration appended their signatures to a huge banner detailing the manifesto for PSI Human Right to Health Global Campaign.
8 kilometer peaceful procession
As part of continued campaigns for the promotion of quality healthcare within the region, a delegation led by Baba Aye from PSI, and Abdrafiu Adeniji from WAHSUN, embarked on an 8km peaceful procession from the Nigeria Police Force Federal Headquarters junction to the Economic Community of West African States (ECOWAS) office in Abuja to present he Health for All campaign statement.
The statement, which was received on behalf of ECOWAs by its Head of Registry/Administrative Officer, Department of General Administration and Conference, Mr. Callystus Alozie Agomuo, detailed concerns by the Network for health to be given the priority it deserves, for universal health care to be realized.
Awards of Honour
To conclude the 10th year celebrations, the current leadership of WAHSUN, acknowledged the contributions, continued support and great advice that some of its founding members continue to offer.
Three of them: Bro. Abu Dinbon Kuntolo, retired General Secretary, HSWU-Ghana; Bro. Richard Kwasi Yeboah (Rev), immediate past Chairman, WAHSUN, and former president of HSWU-Ghana; and Miriam Tiemtore, retired Secretary General of the Health Services Workers Union of Burkina Faso, received Awards of Honour from the Network.