The Global Union Federations (GUFs) group - of which Public Services International (PSI) is a part - and the Trade Union Confederation of the Americas (TUCA) have all expressed alarm at the brutal repression unleashed by the military and police forces in Colombia. The violent response to the protests that have been organized by the National Strike Committee since April 28 have already caused dozens of deaths, injuries and hundreds of people have been arrested and even disappeared. PSI, the GUFs and TUCA are jointly requesting the immediate and urgent intervention of the United Nations (UN) and the Organization of American States (OAS).

“The organizations that have signed this letter are deeply alarmed by the brutal and atrocious events that have occurred in Colombia over the last few days and we declare our total rejection of armed violence in the country against its own citizens. We call on the Inter-American Commission on Human Rights - IACHR and the United Nations High Commissioner for Human Rights to urgently intervene in Colombia to stop the brutal police violence unleashed during the during the National Strike in across the country”, say the GUFs in a letter sent to Antonia Urrejola Noguera, president of the Inter-American Commission on Human Rights (IACHR) and Michelle Bachelet, UN High Commissioner for Human Rights. 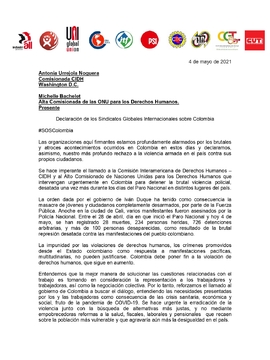 The signatory organizations report that the National Strike Committee of Colombia had registered 28 deaths, 234 people injured, 726 arbitrary detentions, and more than 100 people disappeared between April 28 and the writing of the letter. “The order given by the government of Iván Duque has resulted in the massacre of completely unarmed young people and citizens by the Public Security Force. Last night in the city of Cali, several protesters were killed by the National Police”, the letter denounces.

This Tuesday, May 4, the United Nations High Commissioner for Human Rights condemned the violence against protesters in Colombia: “We are deeply alarmed at developments in the city of Cali in Colombia overnight, where police opened fire on demonstrators protesting against tax reforms, reportedly killing and injuring a number of people”, declared its spokesperson, who also stated that the UN office in Colombia “is working to verify the exact number of casualties, and establish how this terrible incident came about in Cali”.

PSI affiliates have been actively participating in the National Strike against the tax reforms proposed by the government began on April 28. Although the bill did include a tax on the richest, Duque's reform also sought to increase revenue by raising taxes on basic food staples and essential services including electricity, gas and sanitation. The proposal also determined that low wage workers who are currently exempt should start paying income tax, which would affect at least 3 million people. After the massive mobilizations, the president announced the withdrawal of the project on May 2, but the protests continued due to the social and economic demands in the midst of the crisis experienced in Colombia.

“We understand that the best way to solve work-related issues is by talking to worker representatives and through collective bargaining. Therefore, we reinforce the call to the Colombian government to seek dialogue, understanding the needs presented by workers because of the health, economic and social crises resulting from the COVID-19 pandemic. The eradication of violence is urgent together with the search for fairer alternatives, and not through regressive health, tax, labour and pension reforms that impact the most vulnerable population and that would further aggravate inequality in the country”, write the GUFs.