Public Services International forms part of the trade union delegation participating at the Civil Society Days of the 2014 Global Forum on Migration and Development (GFMD) which started on Monday 12 May at the Munchenbryggeriet conference centre in Stockholm, Sweden. The Global Unions will hold a Trade Union Forum “Speak-Out for Migrant Workers' Rights” on 15 May, the first-day of the official government meetings. 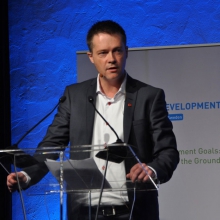 In the opening plenary, Per-Olof Sjöö, President of Building & Woodworkers International (BWI) and its Swedish affiliate GS, spoke on behalf of the Global Unions, emphasising the rights-based approach to labour migration. Since the first GFMD, the global trade union movement has pushed for a real commitment towards a multilateral governance of labour migration. Labour migration is about the human rights of workers.

Current discussions in the context of the post-2015 development agenda focus on migration and the global trade union movement is deeply concerned about the pragmatic approach that sees labour migration as “tool for development” rather than viewing migration as a symptom of the failure of the current model of development. During an address to the Treaty Body of the United Nations’ International Convention on the Protection of the Rights of All Migrant Workers and Members of Their Families, PSI General Secretary Rosa 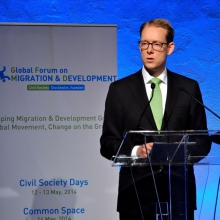 Pavanelli emphasised that labour migration “must be addressed in a holistic manner, with full consideration of human rights and sustainable, social and economic development.”

Migration is a cross-cutting issue and it must be integrated within the three development goals: Full Employment and Decent Work for All; Universal Social Protection; and Gender Equality.

On 14 May, Rosa Pavanelli will speak at one of the three break-out sessions during the Common Space – an interaction session between civil society delegates and government representatives.

Useful links and other information: