In a joint statement issued on Wednesday, May 19th, Global Union Federations (GUFs), including Public Services International (PSI), call on the government of Colombia to accept the request of the Inter-American Commission on Human Rights (IACHR) to visit the country to observe the human rights situation in the context of the protests that began on 28 April. The organisations also request that during this mission a hearing be held with this consultative body of the Organisation of American States (OAS).

The GUFs statement, made jointly with the Trade Union Confederation of the Americas (TUCA) requested that, “within the monitoring actions that the IACHR considers necessary during its visit to Colombia, a broad approach be developed that includes the testimonies of social and trade union organisations affected, with threats and human rights violations and whose members have been victims since before and during the protests. In this logic, the contributions of the GUFs and the Trade Union Confederation of the Americas (TUCA) will be of fundamental importance through a hearing with these organisations."

The IACHR's request to the Colombian government was made on 14 May based on widespread allegations of human rights violations resulting from the excessive use of force against demonstrators. The GUFs and TUCA also urge Colombia to "accept the request for visits by UN special rapporteurs to guarantee the right to protest and freedom of expression and the elimination of violence against women, arbitrary detentions and enforced disappearances, violence against human rights defenders and torture."

Read the full statement below (in Spanish): 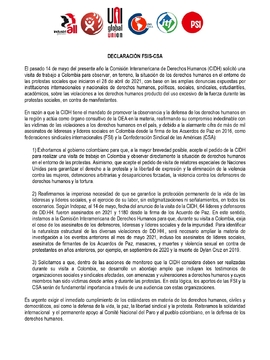