PSI has briefed its affiliates on the shortcomings of the upcoming G20 agreement on international taxation and is asking them to take urgent action with their governments. PSI calls for a fairer and stronger reform of international corporate taxation.

Following the publication of a G20 statement in July 2021 (see PSI reaction), the G20-OECD negotiations for the reform of international corporate taxation rules are now reaching their final stage. The G20 is expected to endorse a final deal at its Finance Ministers meeting on 12-13 October, followed by the Leaders summit on 30-31 October.

Trade unions must maintain the pressure for a fundamental change of transfer pricing rules.

The deal is likely to introduce significant shifts in the current system in the form of a minimum tax rate and the recognition that transfer pricing rules do not function well in digitalizing economies. However, the G20 agreement that was presented in July 2021 is still a long way from trade union demands.

In a briefing note released today, PSI describes how the ambition of the reform remains limited, some elements of design are flawed, and many elements continue to reflect existing tax biases - in particular those that disadvantage many developing countries. Considerable efforts will need to be done in the coming months to try to address some of these shortcomings and to ensure that as much foundations as possible can be laid for future reform. 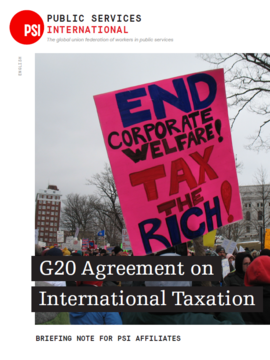 PSI supports the recent comments recently sent by the G-24, an inter-governmental organization representing the interests of 24 developing economies, to the OECD Inclusive Framework.

In particular, PSI affiliates should call for:

Above all, trade unions must maintain the pressure for a fundamental change of transfer pricing rules. The G20 agreement should be considered as only the beginning of further global tax reform. Unitary taxation is required for all corporate profits, based on allocation factors representing all factors of production including employment (see PSI policy demands) .