Increasing employment opportunities for trans workers, visibility of the problems they confront, and publicizing their demands are urgent priorities. Strengthening the self-organization of trans workers is also of critical importance.

All of these issues were discussed during the first Regional Meeting of Trans Workers, held on November 19th. The meeting was organized by PSI Interamerica and its Regional LGBT+ Committee, with the support of the German trade union central DGB.

An introduction was given by PSI Interamerica’s Regional Secretary, Jocelio Drummond where he presented PSI and its regional and global priorities. The proposal to organise this meeting came from the PSI LGBT+ Regional Committee. In addition to the members of this committee, trans workers from Brazil, Colombia and Argentina participated.

"This meeting was of fundamental importance in initiating the debate on the issue of public service employment for transgender workers, and in identifying how we still need to move forward in this debate," says Dandara Felicia, a black transvestite worker, human rights activist, intersectional transfeminist, and recently elected first alternate councilwoman of the municipality of Juiz de Fora, Brazil. "It’s clearly visible how we still need to advance in the area of jobs and work for transvestites, but also so that the organization of these people in the labour market is freer and without the need for protection of trans bodies by cis bodies even in trade union organizations. Since we are few, we still need many allies so that our demands are seen and met," she analyses.

We still need to advance so that the organization of transgender people in the labour market is freer and without the need for protection of trans bodies by cis bodies even in trade union organizations.

According to Gabriela Figueroa, head of the University of Buenos Aires Staff Association (APUBA) and the Argentine Federation of National University Workers (FATUN), when trans workers enter the workforce, they are required to have completed secondary education, but many have not had access to education, since discrimination occurs in all areas. "We need to think about more flexible access when assessing entry requirements for jobs. Agreements should provide for the possibility that they can continue studying once they have entered," she says.

The positive experience of the University of Buenos Aires was one of the topics discussed at the meeting. "At APUBA we have been working for many years asking for quotas for transsexual people in national congresses. Many universities have accepted this and are already doing so," says Figueroa.

According to her, governments and unions must work together to guarantee access to decent and dignified work for all people, including trans people. "One issue discussed at the meeting was the need to train and raise awareness among workers in this area, especially those in management positions. We must raise awareness and make sure that there is no discriminatory treatment from the institutions, including unions" she defends.

The need for self-organization of trans workers was reinforced during the meeting by PSI Interamerica Regional Assistant Euan Gibb, who said that while PSI could facilitate the creation of these spaces for organization and debate, how these spaces are filled should be the responsibility of the workers themselves.

The following next steps were agreed to at this meeting:

1. Employment: defending specific jobs for trans people – creating alternatives to jobs normally occupied by this group such as prostitution, beauty salon and others.

• Write an article about these issues and spread it widely in the PSI structure, deepening this debate.

• Treat these themes with care to avoid further stigmatisation of trans people.

• Seek partnerships with universities (CONTUA) municipal services (CONTRAM) and health, where there will possibly be more openness to create specific vacancies / jobs. The experience of the University of Buenos Aires - Argentina may provide an example to follow

2. Alliances: Confirm with ILGA (with whom we have already signed an agreement) what work they have with trans people. Seek other alliances with trans organizations in the region. With allies we will be able to work better on public policy issues in health, education, individual documents, violence and others that we have in common, with the distinction that as public workers we have a role to play in providing these services.

3. Integrate the trans people that participated in this meeting into the whatsapp group of the regional LGBT+ Committee, making the perspectives of this group more visible in the discussions of the Committee.

4.Organize a second meeting in mid-2021, inviting trans participants from other countries of the Americas and even from other regions of the world that participate in the unions, to continue the discussion of trade unionism and trans people.

The first Regional Meeting of Trans Workers, held on November 19, 2020, discussed the urgency of creating jobs for trans people, as well as promote a greater visibility of their claims and problems and, likewise, the strengthening of the self-organization of workers belonging to this social group. 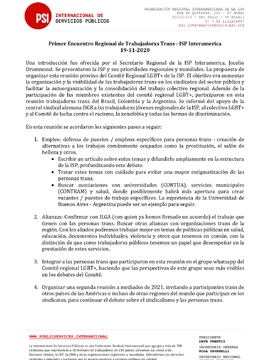