Against the backdrop of the latest report from the UN’s Intergovernmental Panel on Climate Change (IPCC) on the devastating and deadly consequences of climate inaction, feminist civil society groups are calling on governments to change course and make urgently needed, ambitious, transformative commitments at the upcoming UN gathering on gender equality, climate change and the environment.

The latest IPCC report gives the clearest indication to date of how a warming world threatens people and planet—highlighting a narrowing window for action and a need to prepare for more changes to come. The report includes a range of evidence that inequalities are being exacerbated by climate change and notes the need for transformative change: “gender and climate justice will be achieved when the root causes of global and structural issues are addressed, challenging unethical and unacceptable use of power for the benefit of the powerful and elites.”

“The IPCC report confirms that those pushed to the periphery of power are the most impacted by climate change,” said Mwanahamisi Singano, Senior Global Policy Lead at the Women’s Environment and Development Organization. “It provides a clear call to interrogate different forms of vulnerabilities within communities, countries and regions. In short, it calls for feminist climate justice.”

It’s the richest countries, those that have caused the problems and can most afford to make changes, that are blocking changes and putting profits before people

From 14 to 25 March, the 66th session of the UN Commission on the Status of Women (CSW66)—the UN’s largest gathering on gender equality—will address the topic of environment and climate change, centering it for the first time as its priority theme. Feminist groups say that current proposals made by member states illustrate another example of the “failed climate leadership” of G20 countries bemoaned by the UN Secretary General, and show little regard for the immense, catastrophic suffering women face as a result of climate inaction.

“This is the first time governments have agreed to focus on gender, environmental and climate justice,” said Kate Lappin of Public Services International. “And yet, it looks like many negotiators would rather spend time diluting existing commitments to gender equality than fighting for the urgent, transformational changes needed to have a chance at a habitable and equitable future for all. It’s the richest countries, those that have caused the problems and can most afford to make changes, that are blocking changes and putting profits before people.”

Chief among the groups’ demands is the urgent need for rich countries to meet climate finance obligations, and increase funding to redress ‘loss and damage’—the immediate and unequal climate impacts that cannot be adapted to. Groups also want governments to commit to a just and equitable transition of global and national economies to decarbonised economies framed around the ability of all people to enjoy human rights, including the right to care and to a safe and healthy environment. Central to this would be large scale investments in public services, care and decent work. 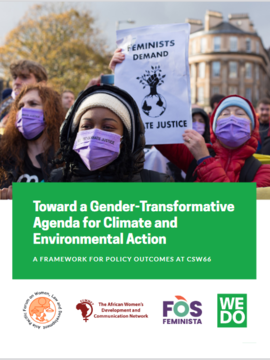 “The Global South countries have—for long—been demanding Global North countries to pay their fair share of climate finance in line with their historical and continued responsibility for the ongoing climate catastrophe,” said Wanun Permpibul, Executive Director of Climate Watch Thailand. “The reality of loss and damage as reported by the IPCC is not new. Women in our communities have always had clear evidence of this, and it is now backed by science. Governments need to address loss and damage and provide communities with dedicated and direct access to the funding as it is a matter of life and death for those on the frontlines of the war against the climate crisis.”

“CSW is not happening in a vacuum. To ignore the grave and multiple crises we and the ecosystems we are part of face would be a significant failure. It is of utmost importance that at CSW governments include a definition of climate and environmental justice with a feminist lens to really deliver on their mandate this year,” said Emilia Reyes, Program Director at the feminist Mexican organization Equidad de Género: Ciudadanía, Trabajo y Familia. ‘“Without this, any commitments and progress on structural issues, gender equality, women’s human rights, sexual and reproductive health and rights, ending gender-based violence, and reducing inequalities would amount to rhetoric and be rendered redundant, further solidifying the failures we saw at COP26.”