From volunteers to employees

Prakash Devdas has been waiting for this moment for eight years. Sitting inside the Central Government  Industrial Tribunal Labour Court No. 2 in Mumbai, immense happiness fills him when the presiding judge reads the decision:

“I find that the conclusion drawn by the respondent No. 1 that the CHVs are the employees of MCGM for the purpose of EPF & MP Act, 1952 and further determined that Rs.226479273/- is due from MCGM in respect of Community Health Volunteers on account of PF, Pension Fund contributions and administrative/inspection charges towards PF & EDLI fund for the period from Feb. ’11 to Aug. ’16 is proper and as such there is no infirmity in the order. For these reasons the appeal is liable to be dismissed. Hence the appeal is dismissed.”

It was a victory for all the 4,000 all-female Community Health Workers (CHWs) employed by the Municipal Corporation of Greater Mumbai (MCGM).

For Prakash Devdas, it was a personal victory as much as a union victory.

A victory for all the 4,000 all-female Community Health Workers (CHWs) employed by the Municipal Corporation of Greater Mumbai (MCGM).

CHWs protest for their right to social security

USD to be deposited by the MCGM to the CHVs 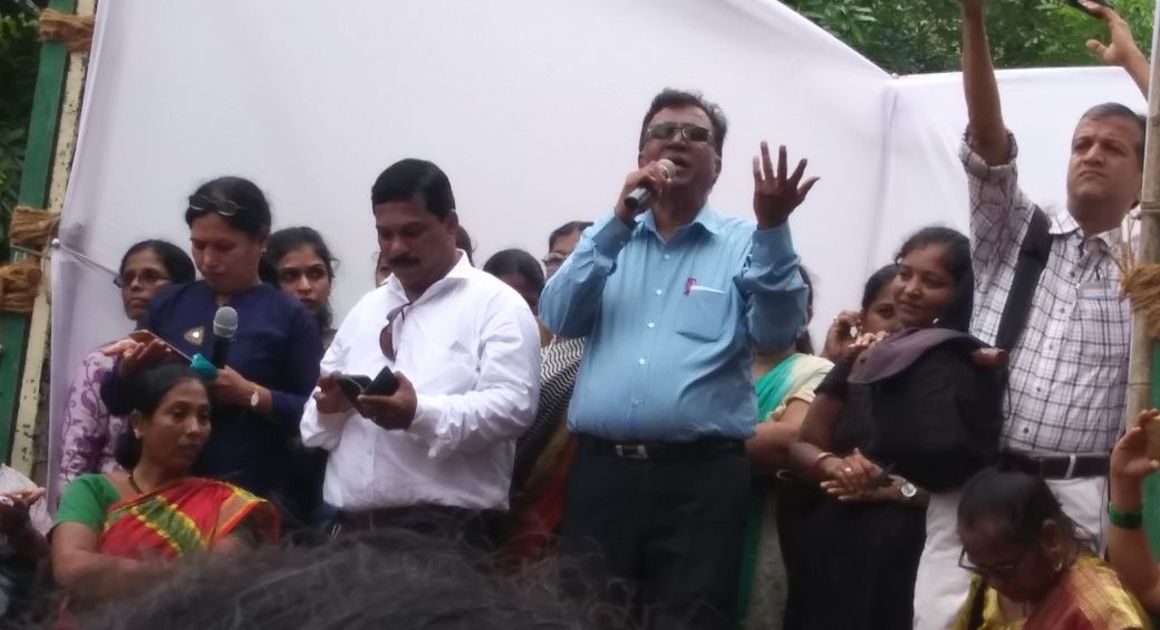 This is the minimum required by the law. The municipal corporations shouldn’t break the law.

The path to recognition

The Mumbai Mahanagarpalika Karmachari Mahasangh Municipal Unions’ Trust (MMKMMUT) Mahapalika Arogya-Seva Karmachari Sanghatana (MASKS) has long been fighting for Community Health Volunteers (CHVs) to be accorded the proper compensation and social security befitting a government worker. But before the compensation and benefits must first come recognition as government employee, and changing the way institutions regard them, from “volunteers” to “employees,” has not been easy.

In 2000, the union raised an industrial dispute concerning CHVs’ employment. The union had argued that having put in at least 10 years of continuous service in the public health department for a fixed remuneration of Rs 500.00 per month (which later increased to Rs. 750.00 per month) and having been appointed according to the rules of the corporation, the CHVs were in fact working as part-time workers of the corporation.

When recognition came in 2016, and was just as soon threatened, Prakash Devdas, president and legal counsel of the union, did not hesitate to summon the full force of the law to fight the MCGM’s appeal against making contributions to the Employees’ Provident Fund on the grounds that the community health workers (CHWs) are volunteers and not the municipal corporation’s employees.

In 2014, when the union filed a complaint to the Regional Provident Fund Commissioner of the Employees Provident Fund Organisation regarding the failure of the MCGM to make contributions to the CHVs’ provident and pension fund, three years after the corporation had been directed to do so by the 2011 Ministry of Labour & Employment Notification, such complaint was to be the start of a landmark case in India involving a municipal workers’ union fighting for their rights under the Employees’ Provident Funds & Miscellaneous Provisions (EPF & MP) Act of 1952.

“There may be about 50,000 CHVs working in the different municipal corporations around India,” Prakash Devdas says. "I encourage them to explore similar and all legal options available to assert their right to decent work."

After much back-and-forth, the Regional Provident Fund Commissioner decided in 2016 that the “community health workers are the employees” of MCGM “for the purpose of the PF act and determined the amount of Rs.226479273/- for the period from Feb. ’11 to Aug. ’16.”

“How could they not be considered employees with the amount and extent of work that they are expected to do,” Devdas asks, quite rhetorically.

“Are the CHVs workmen of the corporation?”

CHVs began to engage with the MCGM in 1993, in the last three years of the Indian Population Project-V, a World Bank-funded project that aimed to strengthen maternal and child primary healthcare, particularly, among the urban poor population.

When the World Bank funding ceased, the MCGM continued the project, and continued to engage CHVs, who received a monthly honorarium for their voluntary work.

In what appeared to be a circular argument, the MCGM had argued that CHVs are not employees of the corporation because they are voluntarily working for a fixed honorarium, from 9am to 2pm, and they are not obliged to perform any obligatory duties.

However, the labour court thought otherwise. In its judgment, the court “came to the conclusion that CHVs have been employed by the corporation to discharge duties which are essential and perennial in nature,” and that they are considered employees and not volunteers, because:

With recognition comes entitlement: A total Rs 22.67 crore (around USD 3.3 million) of contributions covering the period February 2011 to August 2016, is to be deposited by the MCGM to the CHVs’ provident and pension fund.

“Better days are coming to CHVs”

News of the appellate court’s decision was met with celebrations by Mumbai’s community health volunteers and sympathizers and allies from civil society. Around one-third of Mumbai’s CHVs will retire in the next two to three years, and with this ruling, they are at least assured of a more comfortable and independent retirement.

“We are very happy with this decision,” Devdas beams. “Better days are coming to CHVs.”

Prakash Devdas is referring to their legal battle for minimum wage, which is currently in the final stages with a decision due to come out by the end of this month. If won, CHVs will receive INR7,000.00 more than what they are currently receiving to meet the minimum wage of INR12,000.00 per month. They will also get a special allowance.

Meanwhile, the legal case seeking permanency of CHVs is yet to be decided by the Indian Supreme Court.

“Other informal worker groups feel inspired by the wins of CHVs,” Devdas shares.

﻿﻿﻿﻿﻿﻿﻿“There are about 7,000 ‘volunteers’ in solid waste management, and we will do our best to help them achieve what we have achieved for the CHVs.”