This year’s World Health Day falls during the gravest public health emergency in the history of the World Health Organization (WHO). Supporting nurses, midwives and all health workers at this moment requires a genuine return to the spirit of the Alma Ata Conference for health as a fundamental human right, based on a radical new economy which guarantees quality public services for all

This year’s World Health Day falls during the gravest public health emergency in the history of the World Health Organization (WHO). Over a million people have been infected by the new coronavirus and it has killed about 70,000 people. And these grim figures continue to rise. Governments and the international community must take urgent and decisive action to curtail and defeat the pandemic and ensure that never again will humankind be put in such jeopardy.

Healthcare workers on the front line of the COVID-19 response face a perilous situation. They are overstretched because our hospitals are grossly understaffed. And there is not enough personal protective equipment (PPE) to protect them properly. This sobering situation is worrying for health workers and their families. It also impedes the global pandemic response.

Years of privatisation and cuts in the funding of public healthcare preceded this morbid scenario of unpreparedness of health systems. Based on a neoliberal consensus, pushed with the policies and programmes of the international financial institutions, governments have slashed wages and put ceilings on health and social sector employment, despite the pressing need for employing more health workers.

Just four years ago, there seemed to be renewed hope that understaffing would become a thing of the past when governments committed to implementing recommendations of the United Nations High-Level Commission on Health Employment and Economic Growth (UN-CommHEEG) to improve health employment and working conditions, to meet the envisaged global shortfall of 18 million health workers and achieve universal health coverage by 2030.

The World Health Assembly further resolved on a five-year action plan for health employment and inclusive economic growth based on those recommendations, in 2017. But alas, when the pandemic started, very little had been done to implement the plan.

As the Director General of the WHO noted at the beginning of 2020, we might be entering a period of pandemics which the world will be “dangerously unprepared” for. To avoid this, starting from now, governments must prioritise investment in health and take all necessary measures to safeguard the lives and wellbeing of health workers and other workers on the frontline of response without delay. We need safe workers to save lives.

This crisis further highlights the importance of the social and economic determinants of health. Poverty and overcrowded housing make social and physical distancing very difficult if not impossible for millions of people. In several cities, this has led to people shunning lockdown directives. Lack of access to potable water for 40% of the global population means some people cannot apply even basic preventive measures such as handwashing.

This global emergency illuminates the interconnectedness of public health and the international economic system.

We seize this moment to stress the immediate need to protect the human right to health of migrants and refugees and avoid a major public health emergency. The pandemic’s effect on thousands of people concentrated in restricted areas without access to healthcare services, soap, clean water and sanitation would be catastrophic.

This global emergency illuminates the interconnectedness of public health and the international economic system. This much was realised at the 1978 Alma Ata Conference, where delegates released a declaration for “health for all by 2000”, noting that this could not be achieved without establishing a new international economic order which puts people over profit.

Unfortunately, over the past 42 years since that historic declaration, the neoliberal model of development has been the norm. The consequence has been concentration of wealth in a few hands while public services, including healthcare, have been underfunded, marginalised and left to rot. This has resulted in an avalanche of crises; a massive global recession, a climate and ecological crisis, erosion of social protection and informalisation of work and living for the vast majority of people.

The current pandemic might have been unpredictable. But strong public health systems rooted in a global economic order which prioritises solidarity and the wellbeing of people and the planet over the profits of a few would have made it much more manageable.

The unfolding public health, social and economic crisis is a clarion call of history for drastic change. It is now clear that we cannot rely on the market to protect our health. Supporting nurses, midwives and all health workers at this moment requires a genuine return to the spirit of the Alma Ata Conference for health as a fundamental human right, based on a radical new economy which guarantees quality public services for all.

As Dr Tedros Ghebreyesus pointed out, the world has to break the cycle of panic and neglect. This can be achieved by applying the positive actions taken by some WHO member states thus far and implementing subsisting international covenants which could ensure universal public health. To achieve this, PSI calls on all governments to:

Find translations, stickers and resources on our

Coronavirus is a deadly threat to frontline public service workers - in particular, our members in the health sector. We rely on them to save countless lives - but for them to be able to do their job, governments across the world must take stronger action now. At this moment, health workers represent about 12% of the infected population globally, and the death toll is unbearable. Illustration by Zoran Svilar 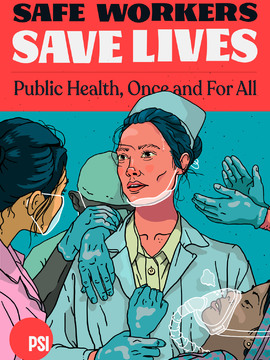