We want a world where everyone has safe public water on tap whenever needed.

We want a world where clean public energy is delivered to our homes, and governed in the public interest.

We want a world where these essential services are provided to everyone regardless of their ability to pay.

We want a world where the workers delivering these utilities can live in dignity, with respect for their union rights and quality employment conditions.

Yet privatisation of water, sanitation and the energy sector has been relentlessly promoted by austerity politicians and many global institutions including the World Bank and the IMF.

User-pay models and rising prices mean many families struggle to pay the bills and severe under-investment can lead to catastrophes such as the Flint Water Crisis.

While utility services might seem like a local issue, their quality and governance is inextricably tied to global policies and issues. Global and regional institutions that impose privatisation or austerity policies need to be challenged.

Even the IMF is now admitting that: “increased public infrastructure investment raises output in both the short and long term, particularly during periods of economic slack”

The resistance to privatisation must be organised locally, but the fight can benefit from regional and global support.

We fight alongside labour and community activists for clean and quality water, sanitation and energy services for everyone.

Essential utility services such as water and energy need to be run in the public interest. They require long-term investment, and should be responsive to local communities and environment rather than foreign shareholders.

Yet too often, these services are privatised, often via Public-Private-Partnerships, which undermines their social purpose, leading to increased tariffs for citizens, decreased accountability and undemocratic governance.

Access to potable water is essential to survival for all living beings. Safe sanitation is key to reducing disease and illness. This means that water needs to be governed as a common, public good.

Water supply and sanitation are natural monopolies: it simply does not make sense to run a parallel sets of pipes or to build parallel reservoirs or treatment plants to serve a city or region. This means these services simply do not work based on 'normal' market dynamics. There is a mountain of evidence for why private corporations should not be given monopoly powers especially when it concerns essential public services. This is absolutely the case for water supply.

When Corporations are given control over water supply, they typically cut wages, lay off workers and attempt to break trade union power. Other tactics used to increase profits include excluding poor neighborhoods, with lower rates of bill payments, from the geographic zone of company responsibility or to install pre-paid meters which disable water access until payment is made.

Decades of water privatisation around the world has lead to disastrous impacts on local communities. The good news is the tide is turning. Hundreds of cities have already chosen to remunicipalise their water supply and unions are playing a key role in the fight for public control. We know that these battles cannot be won without engaged local activists and unions.

PSI supports them through sharing knowledge from campaigns around the world and opposing continued attempts by global institutions such as the World Bank to promote the private water agenda.

The struggle for Public Utilities

Many people are increasingly priced out of accessing energy for their homes and families. A recent OECD study found that electricity prices from private providers were 20% higher than if ownership was wholly public.

hours spent by women gathering water daily across the world.

Improving public utilities is a key way which governments can improve conditions for working class women, freeing up time for access to paid employment.

Energy as a human right

We fight for a world where clean energy production and distribution is governed in the public interest, and with full participation of local communities.

Energy is what keeps modern civilization running. But energy generation based on fossil fuels and short-term profit extraction is destroying our natural environment and public commons.

Privatisation of energy services is blocking universal access and throwing too many people into energy poverty. Major energy corporations consistently trample on workers rights while paying pitiful royalties to extract evermore resources from the land.

The neoliberal model of deregulating, unbundling and privatising electricity production and distribution has failed.

It has failed for energy workers whose wages, working conditions and job security are attacked, and whose unions are often torn apart.

It has failed for families and communities whose tariffs rise to pay corporate profits, shareholder dividends and massive marketing campaigns to sell the same electrons under different labels.

Only when energy is run as a public service can we shift to the cleaner, greener economy we need.

Every dollar of public infrastructure investment increases output by nearly $3. 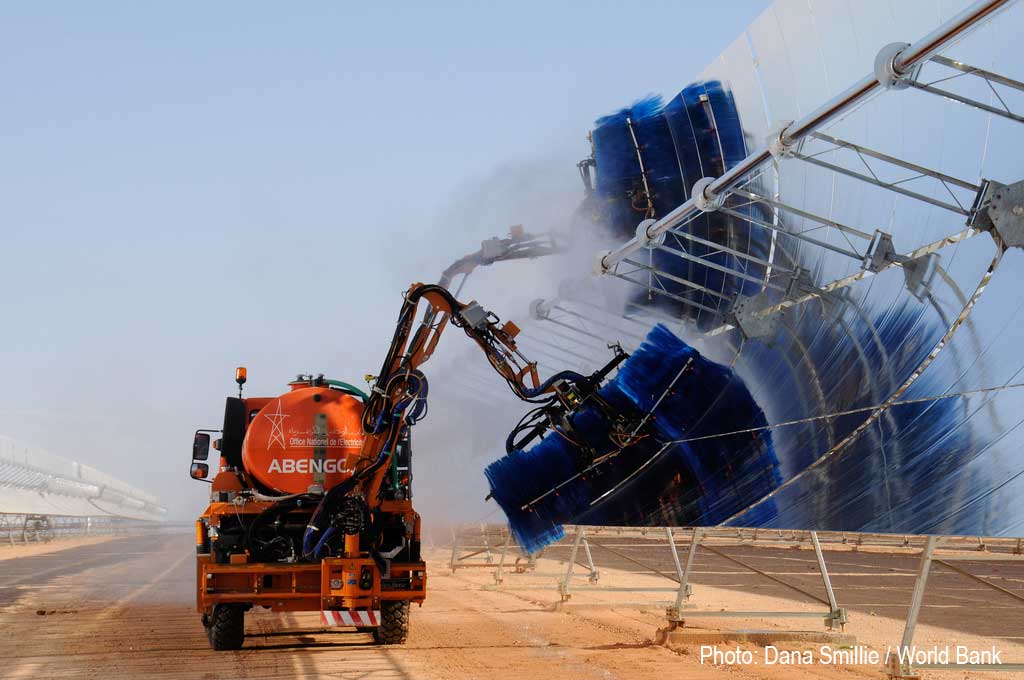 Unions and a Just Transition

We know the shift to a low-carbon economy will cause serious disruption to workers and communities . Many of our members have worked in jobs dependent on fossil fuels for decades and their concerns cannot be ignored. We will not shy away from these difficult questions.

We are building the case for strong government intervention in the energy sector to ensure new, green jobs for the workers displaced by the energy transition. We fight for their right to new training and skills development.

Corporations are unable to balance the social needs of the community and the needs of the environment with their profit maximizing imperatives.

The climate crisis will not be successfully addressed with market-based solutions or by the actors who have denied the problem for so long. We need to break the enormous financial, industrial and political power of the big polluters over our governments. Unions have a key role to play in both building the political will needed to create a green economy and representing the interests of workers during the transition phase.

Renewable energy sources, especially solar and wind, offer options for decentralized electricity production. This will allow local communities and unions to develop collective energy production, responsive to local environments. Instead of subsidies for those who own property and can afford to install renewable sources, we need collective solutions developed at the municipal level.

We fight for clean and quality energy services, run in the interests of local communities, workers and the environment.

We help unions resist privatisation and encourage the return to public ownership and management.

We support the global campaign ‘Droit à l’Énergie’ which seeks to have the UN General Assembly recognise the human right to energy.

We must act urgently to ensure universal access to low-carbon, reliable public energy services with a just and equitable transition for the workers and communities involved. 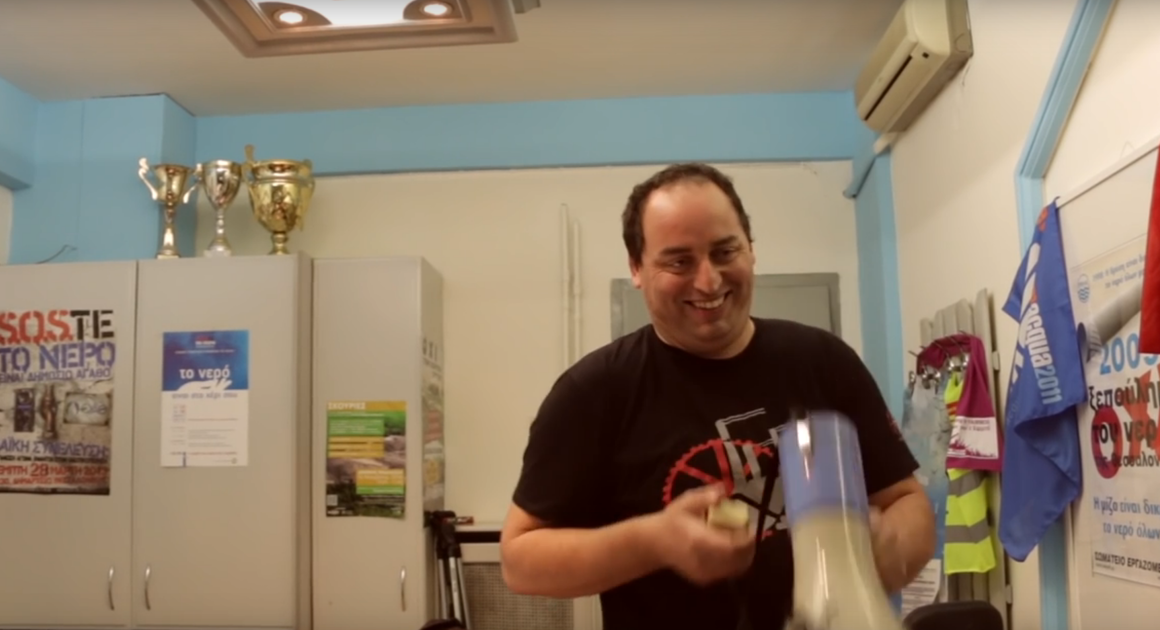 As President of the Water Worker's Union of Thessaloniki, Giorgos has been on the frontline of the fight against privatisation of their water service, imposed by the Troika.

His union worked with local campaigners to organise a city-wide referendum on the water privatisation program. Despite 98.2% of voters choosing to maintain public control, the Troika continues to push for privatization, with French multinational Suez set to buy a significant share.

Check out the full story of the fight for public water in Thessaloniki by watching PSI's Documentary, Something In The Water.

Building the case for public utilities

PSI sponsors high-quality research that can be used by national and local unions to prepare their resistance strategies and to craft their messages.

The PSI research is also used to lobby political decision-makers. At the local and national levels, the research supports the arguments that the trade unions make. It can show that what appears to be a very local or even national decision is in fact part of a regional or even global push. It can serve to open the eyes of policymakers and their staff to the systemic problems with the privatisation approach.

Learn more about our research here.

We work closely with the TransNational Institute and other allies to analyse remunicipalisation trends, share strategies and win fights against privatisation and for public provision.

Campaigns against privatisation (or in favour of quality public services) are inherently political. The key decisions are made by elected officials, who then pass on the decisions for implementation to the executing agencies.

This means, for example, that the manager of the city’s water and sewage works will not be the person to decide for or against privatisation. The mayor and the city council may take the decision. Or it may be the state/ provincial governor. Or it may be the national cabinet, with the key role of the finance minister and possibly even the prime minister or president.

Thus, any campaign against privatisation needs to create sufficient political pressure to counter the behind-the-doors pressures of the privatisation advocates. Crucially, it means that trade unions need to act in alliances with other groups in the community or country.

It is often the case that members of such alliances have never worked with each other. Therefore, it is important to act early enough to build trust amongst partners of an alliance. This trust is crucial, especially as campaigns may require quick and unforeseen actions. It also requires that the alliance partners recognize their own strengths and weaknesses, such that they can reinforce and complement each other.

We fight for your right to high quality utility services

Your friends, families and community relies on these services - and the workers delivering them rely on safe, quality working conditions.

We fight for trade union rights

We lobby against privatisation at the global level

We fight for a just transition

We help build strong coalitions between NGOs, community groups and unions to fight for quality utilites

We fight for the rights of workers in these sectors

Got some inside info on the dodgy practices of companies engaged in water or energy privatisation.