SNTSG and PSI have launched a campaign calling on the Guatemalan government to immediately release Dora Regina Ruano and Luis Alpirez Guzmán, drop all charges against them and end repression against all community leaders, activists, journalists and trade unionists. 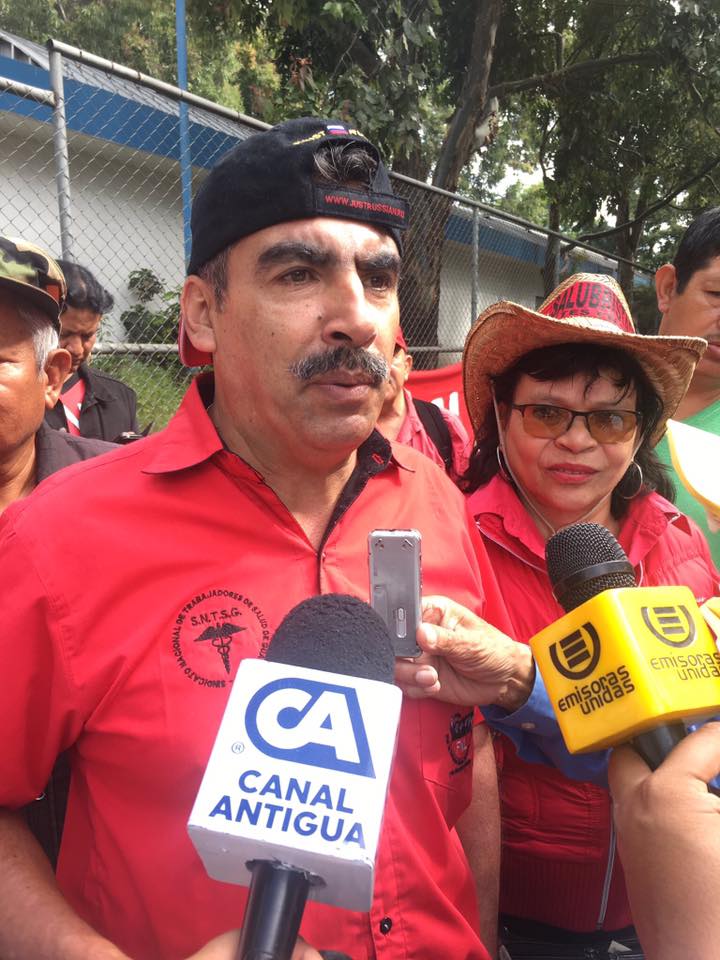 Luis Alpirez Guzmán, General Secretary of the National Union of Health Workers of Guatemala (SNTSG), and Dora Regina Ruano, from the same organization, have been detained since 17 January for negotiating and signing a collective agreement between the union and the Ministry of Health authorities in 2013.

According to the Attorney General's Office against Corruption in Guatemala, the alleged crime of the two unionists was to have endorsed the creation of a regulation concerning expenses and perdiems for workers and the Ministry of Health authorities. According to the plaintiff (the Attorney General's Office) this is illegal. They consider that only the president of the country has the absolute power and faculty to authorize and sign this type of regulation.

The prosecutor's office has argued that Luis Alpirez Guzmán and Dora Regina, through the signing of the collective agreement at that time, embezzled the Ministry of Health for a large amount of money. They have both been charged with ‘abuse of authority’ and are currently being held in prison.

The charges are also directed towards a lawyer, advisor to the negotiation process, hired directly by the then Minister of Health, for having received a fractioned fee payment of approximately USD1,800,000. Both unionists are being linked to this fact, under the assumption of financial intermediation to benefit this person.

However, in a hearing on 22 January, the only charge raised by the prosecution is for the alleged "abuse of authority" of the two unionists. Since they did not act as representatives of the Ministry of Health, but of the union, this is a fallacious argument that has no legal basis.

PSI is calling for the immediate release of the detainees as this is an attack on collective bargaining in the public sector. The Guatemalan Attorney General’s office is clearly being used to criminalize one of the most important instruments of the trade union movement.

PSI is actively working to move an official complaint forward at the International Labour Organization (ILO) and has launched an urgent denunciation campaign against the Government of Guatemala and the Guatemalan Public Ministry for depriving the liberty of our colleagues, and to protect other unions in a similar situation from the same threat in the future.

Guatemala has been going through an institutional crisis in recent months that has now become more acute. The Jimmy Morales government has taken political control over ongoing corruption investigations. The International Commission against Impunity in Guatemala (CICIG) organized by the United Nations (UN) and which had been invited into the country in 2006 was kicked out on January 9th, 2019. Morales, who is currently under investigation for illegal campaign financing practices unilaterally broke the agreement with the UN and has systematically increased persecution of community leaders, activists, journalists and trade unionists.

The Morales government appointed a new Attorney General who has politicized the public prosecutor office’s investigations into corruption in the public sector. This has led to a deeper investigation of corruption at the Ministry of Health that occurred between 2012 and 2014.

Join the campaign calling for the immediate release of Dora Regina Ruano and Luis Alpirez Guzmán, for all charges against them to be dropped and for an end to repression against all community leaders, activists, journalists and trade unionists.