The strike was launched to demand the negotiation of the emergency plan presented to the government by the National Strike Committee. There has been massive participation on the streets of Colombia by broad sectors of the population, including PSI affiliates in Colombia, particularly the youth,

The government of Ivan Duque has responded with brutal repression and brutal violence. The National Strike Committee has denounced at least 2,387 cases of police violence, 50 deaths, 578 injured (including 40 victims of aggression in the eyes), 524 disappearances, 1,200 arbitrary detentions, 21 cases of sexual violence against women and 87 cases of gender violence, since the beginning of the mobilisations, which constitutes a humanitarian crisis of great proportion.

But the Colombians are still in the streets. And they are winning. The tax reform was ditched, the finance minister has resigned and a controversial bill to privatize healthcare was abandoned.

The right to peaceful protest is fundamental to democracy.

Join the Colombian people in demanding that the government cease state violence, immediately begin negotiations with the National Strike Committee, and accept the requests of the Inter-American Commission on Human Rights (IACHR) and the United Nations High Commissioner for Human Rights to conduct working visits to Colombia.

Join the campaign on LabourStart

Join the Colombian people in demanding that the government cease state violence and immediately begin negotiations with the National Strike Committee. The right to peaceful protest is fundamental to democracy. The offer of the Inter-American Commission on Human Rights (IACHR) to visit Colombia should be accepted without further delay.

Send your letter of protest 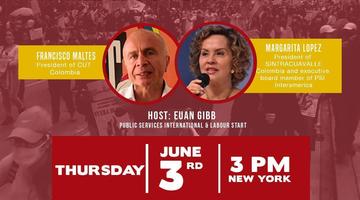